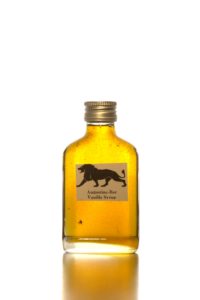 If you didn’t notice before: Vanilla is one of my favorite flavors. I’m talking about real vanilla here, not the cloyingly sweet vanilla flavor you know from ice cream or stuff like that.


Basically you are making simple syrup and throwing in a vanilla pod. But think twice about the sugar you use. I prefer mine made out of light cane sugar, not Demerara or Moscavado. Don’t get me wrong, those types of sugar are very delicious in most drinks, but they easily overpower light flavors like vanilla. You could even make an 1:1 simple syrup, to allow the aroma of the vanilla bean to shine through more. If you do so remember to adjust the amount you use in a drink.

Cut vanilla pod open on side – add sugar and water to pan – heat until sugar is dissolved – add vanilla bean – bring to boil – let simmer for three minutes – turn off heat – leave pan on stove until cooled down to room temperature – bottle and add rum;

You will notice that I made just a small quantity. That’s because I use vanilla syrup mostly in Tiki month and I noticed that it turns bad quicker than other syrups. Especially if you leave the vanilla pod in the bottle. So I decided to make a smaller batch and hope that it is enough for the Tiki party I am throwing at the end of Tiki month.

Another flavor I love is tonka bean. Its flavor is similar to vanilla, but there are hints of woodruff, too. Jamie Boudreau for example uses a vanilla and tonka bean flavored syrup in his Truffle-Old-Fashioned. So I thought I have a go at it: 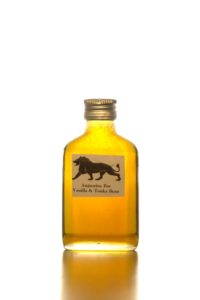 Cut vanilla pod open on side – add sugar and water to pan – heat until sugar is dissolved – add vanilla bean – grate tonka bean into pan – bring to boil – let simmer for three minutes – turn off heat – leave pan on stove until cooled down to room temperature – strain through a tea strainer – bottle and add rum;

The syrup turned out to be even more delicious than plain vanilla. You can use it in recipes calling for vanilla syrup. Tonka bean also pairs especially well with dark spirits.

Just a quick tip at the end: If you are a fan of vanilla like me, buy whole vanilla beans instead of already vanilla flavored ingredients. There are so many ways you can use them: in desserts, in syrups, in a liqueur, to make your own vanilla sugar or as a drink garnish.