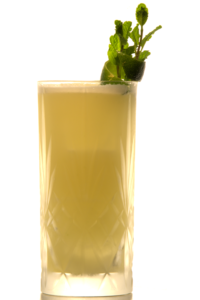 With this last Japanese inspired cocktail a few things are different from the other two drinks. Besides using another base spirit, the inspiration for this one came from a song. To finally come full circle, it also contains another truly Japanese ingredient: sake.

Most of the times when I create a cocktail it is based on another drink or on an ingredient I want to work with. This time it was different: Some time ago I stumbled upon an old Coldplay song in iTunes and instantly thought: “Why not name a drink X&Y?”- So I did. I can not quite explain why I thought that the drink based on this song should be made with gin and sake, but it felt right. Also, the lyrics “you and me are floating on a tidal wave” led me to top the drink of with soda water – like the spray from the waves, get it?

Sort of a Japanese Mojito, sort of…

Of course the drink was in need of some kind of acidity to give the cocktail a clean and refreshing structure. Maybe the first choice here would have been yuzu juice, but as I already described in the first article of this series: yuzu is so damn expensive! So, I used lime instead. The mint just found its way into the drink, because I thought that something was missing. You could argue now, that this makes it a Mojito version, but the mint is shaken, rather than muddled. This puts it more in the corner of a smash. However, some people say that you should shake your Mojito anyhow. Which somewhat makes it a Rum Smash, to make the confusion complete. I am with Xzibit on this one: call it what you wanna call it – as long as it is delicious… (And not a Long Island Iced Tea!)

I admit I do not know a lot about sake, apart from that I like its wine like, but still very different taste. That is why I did not put too much thought into which sake to use. I just bought the one that I had tried previously and is also used at Goldene Bar in Munich, one of my favourite bars: The Ninki Gold Label is an Junmai Daiginjo, which is a dry and fruity sake style. I was surprised by its powerful taste in the final cocktail. Even though I paired it with the not faint-hearted Tanqueray London Dry Gin, which I on top off everything infused with some Sencha Take green tea. – Remember, we are making Japanese inspired cocktails after all! – I even had to adjust the amount of gin in the final recipe, that it could stand up to the sake.

Before I get to the recipe itself I just like to share some wisdom on tea infusions with you. There are people out there who will tell you that you should let the tea infuse for several hours, or even days. In my opinion this is total b.s. According to my experience and as you can see in this video on Small Screen Network it almost makes no difference if you steep tea in boiling water or in alcohol. Just a few minutes are enough to deliver the desired results. Otherwise you just end up with a infusion that is far too bitter. This rule especially applies to black tea, such as Earl Grey, with the lighter flavoured Sencha green tea it is ok to let the whole thing sit for 15 min, depending on the amount of tea and gin you use and the alcohol content of the gin. I used just under a tea spoon for the amount of 6 cl (2 oz) gin at 47,3% (94,6 Proof).

As I already mentioned, the dominant flavour of the drink is the sake. It tastes of wine and umami complimented by subtle notes of juniper and mint. I reckon if you would sip a Mojito at the same time, you would not at all notice the similar base. It just tastes so extremely different! With this much booze in it and the somehow heavier and more complex aromas this, contrary to a Mojito, is not intended to be a summer sipper. However, it is a great drink for the first days of spring. – Yes I know we are still stuck in the middle of winter, but at least you now know what to drink when spring finally arrives.