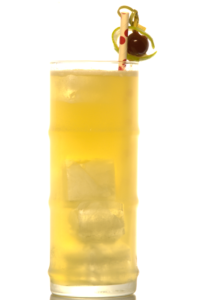 The second instalment of my Japanese cocktail trilogy again features Japanese whisky. However, this time it is a Blended Malt combined with Japanese plum liqueur and green tea. This might be the perfect beverage when watching the namesake movie, or so I have heard…

I do not now how many years ago I had the idea for this drink. Believe it or not the cocktail was inspired by the sacrilege of a cocktail, the Long Island Iced Tea. I think it was on the Absolut vodka homepage, back in my personal dark cocktail days, where I had read the recipe for a Tokyo Iced Tea. This drink’s only Japanese feature was the added Midori liqueur and even back then I was not even a bit tempted to try this recipe. The main problem I had and still have with all “iced teas” is that they don’t actually contain any tea. And yes I know why it is called an “iced tea” and there is probably no sense in discussing this drink any further anyway.

To resolve that problem I dreamt up the “Lost In Translation”. As I already told you it contains actual tea and in my first draft it was a mix between whisky and gin, but that sounded too gross even for my extravagant taste. So, I skipped the gin and replaced the ordinary triple sec liqueur with some Japanese Umeshu liqueur. What the heck is Umeshu, you might ask and this would be a perfectly fine question. I do not know how I first heard of its existence, but I instantly knew that it had to go in this drink. Umeshu is a plum liqueur, based on either sake or in this case on shōchū. Either way it clocks in at around 15% ABV (30 Proof) and has a light and delicate, slightly sweet flavour.

Yes, There Is Actual Tea In This!

I don’t know what it is with this article, but I keep on repeating myself again and again. Nevertheless, this probably is the most important thing when mixing this cocktail! Instead of topping the drink up with cola or lemonade, I decided that it should deliver what the name promises and therefore I added some green tea to it. Now, bear with me, with such a vast variety of green tea out there it is somewhat important to make the correct choice. Considering the other ingredients in the mix, we want a strong flavoured tea, but not so powerful that it overpowers the whole thing and of course it has to come from Japan. That is why I went for a Sencha Makinohara green tea. The advantage of this style of Sencha tea, besides its relatively small price tag, is that you can brew it at slightly higher temperatures, without it becoming a disgusting mess. We can use that to our advantage and make the tea with hot water at about 80 °C – 85 °C (176 °F – 185 °F) to get a more strongly flavoured tea.

Get Lost In This Drink

It is astonishing that you can taste every single component in this drink. However, it is not like the ingredients do not match, instead they become somewhat integrated without losing their own character, if that even makes sense. The initial and somewhat most pronounced taste is that of the Japanese whisky, which is not that surprising considering its strong flavour when drinking it neat. The subtle sweetness of the Umeshu is balanced by the acidity of the lime juice and the soda water and green tea somehow balance everything out and keep the whole thing together.

So this was the second Japanese style drink and I hope you are already on the edge of your seat to find out what the third one will be! I give you a hint: I will not contain Japanese whisky for a change, but maybe some other part of this drink will be reappear. Until then…