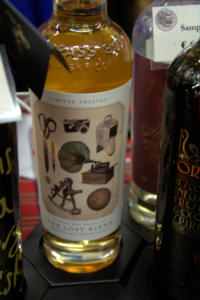 Despite Tiki month I could not resist visiting another spirits trade show. Especially, when it is in my hometown! In this case, I am talking about the Whiskey Village 2016 in Nuremberg which took place for the fourth time. At least this year’s special theme was rum. So, actually we should be alright for Tiki month!

With Tiki month in mind I started off with my visit to the Village at the booth of my colleagues from Gelbes Haus Nuremberg. There I had the chance to try various rums from all over the world. I settled for Cuba, the Dominican Republic and Japan. Yes, you read right, Japan! The Nine Leaves Rum is distilled in Otsu on the Japanese mainland from Okinawan sugarcane. The white rum is unaged and bottled at 50 % ABV. Apart from that, I also finally tried the much talked about Compagnie Des Indes Cuba 16 Years. If you enjoyed this Cuban rum as much as I did you should hurry and grab a bottle, because the supply will run out soon and it is not sure if the company can get their hands on something similar. However, the highlight of this small rum tasting was the Tres Hombres XXI Rum with strong molasses flavour, dried bananas, a slight, but not overwhelming sweetness and burned sugarcane notes. 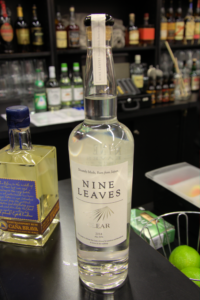 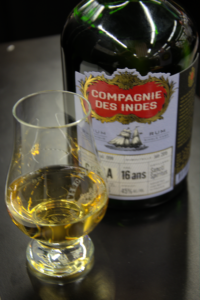 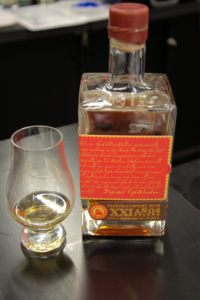 And now: Some more rum… 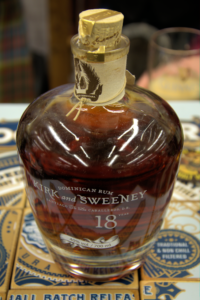 My second stop was at the stand of Bremer Spirituosen Contor where I wanted to try some American whiskies from 3 Badge Mixology. However, the first suggestion was to try the Kirk & Sweeney Rum, which is also bottled for 3 Badge Mixology. It is distilled from molasses in the Dominican Republic by one of the big producers. You can easily find out which one, if you look up the distillery located in Santiago De Los Caballeros, asn mentioned on the bottle. After distillation the Kirk & Sweeney is aged in American oak barrels for 18 years, which for rum aging in a tropical climate is quite some time. However, similar to the Tres Hombres the rum manages to stay balanced and complex while not getting overwhelmed by oak flavours. Finally, I also was able to try the Bib & Tucker Bourbon. I was curious if it could manage to live up to the expectations the beautiful bottle awakes! What can I say, it is definitely worth a try: The relatively high rye content of 26 %, give it a strong and spicy flavour. This is rounded out by some fruity, cereal notes from the 70 % corn while the rest of the mashbill consists of 4 % malted barley. The only drawback with this Bourbon is its rather hefty pricetag… 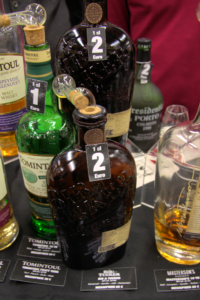 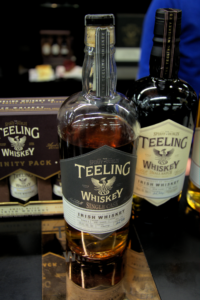 Next I said hello to Thomas Domenig at the Borco booth and he introduced me to Hugh Mac Gabhann the European sales manager of Teeling Irish Whiskey. Hugh took me through the Teeling range and explained to me that Teeling set out to create the best Irish Whiskey they possibly could. One part of their signature style is the use of different cask types to give their products a deeper and more complex flavour. This time, because the Single Malt already managed to win me over at the Finest Spirits, I tried the Single Grain Whiskey. This actually was my first ever grain whisky. The reason for that probably is that I had some unfounded prejudices against this type of whisky. Yet, the combination of 90 % corn and 10 % malted barley completely aged in Californian Cabernet Sauvignon casks sounded more than intriguing. Again, I was not disappointed with the result! It was an flavourful combination of cereal notes, red wine aroma and vanilla. The second whiskey I tried was the Teeling Sherry Cask Whiskey. As the name suggest this one was completely aged in barrels that previously held sherry and it is also bottled at cask strength. This was a totally different beast! While the Teeling whiskey I tried so far was subtle and yet complex, the Sherry Cask was a powerful combination of alcohol, malt and dried fruit notes. It definitely takes more time than 5 min at a crowded spirits far to fully appreciate this whiskey!

For my next stop I visited the stand of Fabian Rohrwasser from the Feingeisterei with his new rum Don Ruffin. This German rum is distilled from molasses from the South American mainland and aged in American and French oak and then finished in Sherry casks. To add enough aroma and complexity the barrels used for Fabian’s rum are relatively small. This way the maturation time of two years is enough to give the rum a deep and rich aroma, reminiscent of Jamaican rum which also manages to have its own character. This unique flavour profile is what I always like about Fabian’s products. On top of that the Don Ruffin has no added sugar, which today is no matter of course. Unfortunately, I forgot to take a picture of the beautiful bottle which has a label directly printed on the bottle, together with some extraordinary decor elements.

Since, I am currently working on an article about the Hibiki Japanese Harmony whisky I stopped by the Beam Suntory booth and had a nice talk about Japanese whisky and Scottish Single Malt with Fabian Fischer of Beam Suntory. Also, I could not resist the temptation of trying the Bowmore 15 Years Darkest. Of course, this classic single malt is neither new, nor that special, but even though I am a big Bowmore fan I never got around to try it so far. Its combination of subtle, but characteristic smokiness and distinct sherry notes make it just an excellent single malt for sipping in front of the fire place. Yet, it is also a lot more complex than the 12 year old bottlings, which are my norm for introducing people to smoky single malt. When being asked about future products from Bowmore, Fabian remarked that there probably will be more bottlings in the style of the Bowmore Mizunara Cask Finish aged in Japanese oak.

Another white blank page I wanted to fill was the tasting of blended whiskies produced by John Glaser and his company Compass Box. So, my last stop was at the stand of Prineus the German importer of Compass Box whisky. There Gerd Schmerschneider and Nicole Daubner explained to me what the whiskies are all about and what makes them special. Apart from the legal problems with the Scottish Whisky Association over the use of new staves fixed in the middle of regular barrels, Mr. Glaser is currently issuing a petition to chance the laws of how whisky is allowed to be labelled. I will not go into the details here, but rather concentrate on their whiskies. Let’s just say that I instantly signed the campaign when I heard about it. 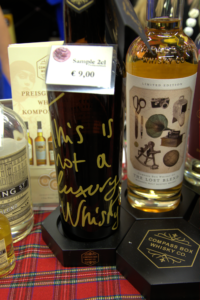 Plum pudding in a bottle and a luxurious, not luxurious whisky

The first bottle of Compass Box I tried was the Hedonism Blended Grain Whisky. Which consists of three different single grain whiskies. You can read the detailed information on the different whiskies in this blend on the Compass Box homepage. – While the Teeling Single Grain Whiskey I sampled earlier was very good for its price tag, this was a different flavour experience indeed! The Hedonism probably was the whisky with the most powerful vanilla aroma I ever tried. Apart from that, the whisky managed to just stack complex levels of cereals, pastries and pudding on top of each over. I guess it is not too much to say that I was completely won over by even the first sip! The second Compass Box whisky Mr. Schmerschneider offered me was the Lost Blend Blended Malt Whisky, a combination of two Highland and a smoky Islay single malt. The Lost Blend was more powerful than the Hedonism with a great combination of fruitiness and light, but noticeable smokiness. Still, they had another bottle in stall for me: The This Is Not A Luxury Whisky is a classic Blended Scotch Whisky consisting of each Highland and Islay single malts and two grain whiskies. Listing the age of the last three components is was started all the trouble with the association for Mr. Glaser. Despite this, the TINALW was even more powerful than the previous one. It showed deep levels of fruitness, vanilla, smokiness and some hints of sherry. All in all, it is hard to say which of the Compass Box whiskies I liked best, because they are all exceptionally good. However, I would probably choose the Hedonism, because it surprised me the most! Also it is a perfect showcase of what grain whisky is capable of. However, I guess sonner or later I will have to explore the whole Compass Box range, as you should, too! 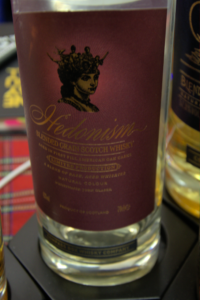