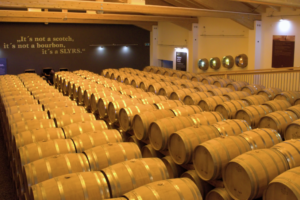 I have been to a few distilleries so far. However, I never visited a pure whisky distillery. So, just I had to visit the Slyrs Bavarian Single Malt distillery when I was in the neighbourhood. The home of the Slyrs Single Malt is absolutely worth a visit. Here is the full story of the Bavarian single malt and my visit.

The grandson of Josef Lantenhammer, Florian Stetter, had the idea for a Bavarian single malt on a trip to Scotland. He was amazed over the similarities between Scottland and Bavaria. So, Mr. Stetter made a bet with his friends over a case of Hopf wheat beer that he could distil whisky just as good as Scottish single malts. After more than a few trial runs he ended up with the first few bottles of Bavarian single malt. In the beginning the worth was brewed at the Hopf brewery and the distillation took place at the eau de vie distillery in Hausham. However, the distillery soon became too small for the rising demand and in 2007 a completely new whisky distillery was opened in Neuhaus near the Schliersee. 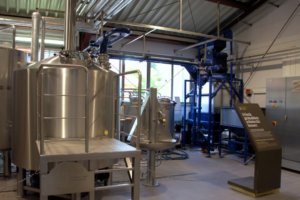 Nowadays all of the production, beginning with the grinding of the malt, takes place in Neuhaus. The malted barley for the mash bill comes from the Weyermann malting plant from Bamberg, Franconia. The mix Slyrs uses consists mostly of malted barley dried over dry heat. A small portion of the malt however is dried using Beachwood smoke. The crushing and subsequent cooking of the grains is done automatically with the distillers controlling the sugar content and the density of the malt-water mix. During the cooking process at 62 °C and 72 °C, where the enzymes break up the starch in the grains into sugars, the solids of the mixture act as an additional natural filter on the floor of the mash tun. Afterwards, the mash rests together with the yeast in nine stainless-steel, temperature controlled fermentation tanks. In contrast to the wooden and open fermentation tanks in Scotland where the fermentation only takes around four days, fermentation at the Slyrs Distillery takes around a week, because of the use of a lower temperature of 20 °C.

Pot-still, but an unusual one 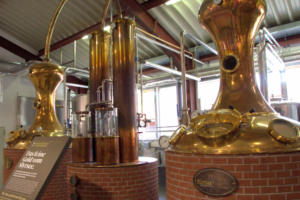 In contrast to most German whisky distilleries, Slyrs uses real pot-stills for distilling the mash. However, the form of the Kothe stills resembles more eau de vie stills, instead of Scottish pot-stills. The reason for that is that the first edition of Slyrs whisky was also distilled on eau de vie stills. Similar to Scottish whisky, the distillation of Slyrs uses a typical two-shot process: First, the mash is distilled using two wash stills to around 30 %. Second, the low wine is distilled for another time on a spirits still to 70 % ABV. During the second distillation the heads and tails of the distillate are cut and only the heart is used for ageing in wood. Yet, before the unaged whisky is filled into the new American oak barrels from World Cooperage the distillate is watered down with spring water from a spring near the Spitzingsee.

Ageing in high and low places 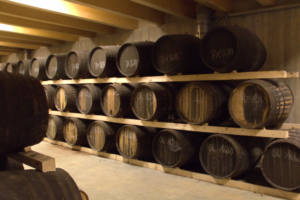 After watering down to 55 % ABV, the Barrique barrels with a heavy toast containing 225 litres of freshly distilled whisky are then stored at the barrel house in Neuhaus, the next village, a barrel house next to the summit station of the Stümpflingbahn or a cutter in the harbour of List on Sylt. For the 12-year-old Slyrs Single Malt casks are used which previously held the Slyrs Classic. Additionally, a range of other barrels are used for finishing the 3-year-old Single Malt. Current editions use Oloroso and Pedro Ximenez sherry casks from the Bodegas Tradition, Port casks, Sauternes barrels from the most famous Premier Grand Cru Classé Superieur Chateaux in Bordeaux, Rum casks from Cuba, Jamaica as well as Trinidad and Marsala Superiore DOC casks from Sicily. If you are lucky, you even get to try an Amontillado sherry barrel finish. However, this edition is very rare. Apart from that, you can also get a highproof version of the classic Slyrs the so-called Fifty One or single cask and cask strength bottlings. If you want a barrel of Slyrs Single Malt all for yourself you can also get one, starting from 40 litres. Slyrs will store, bottle and label it for you. 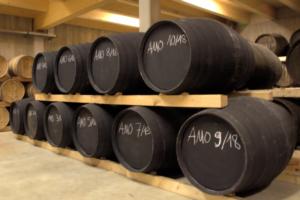 The most important thing: the taste 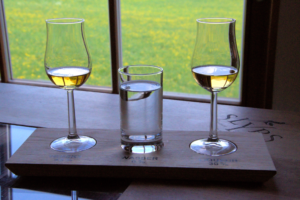 When you take the guided tour, which I absolutely suggest you do, or set off on the self-guided tour you will follow the production steps of the whisky. At the end of it, you will be rewarded by a beautifully arranged flight of Slyrs Classic Malt, spring water and Slyrs Liqueur. Of course, you can also sample every variation of Slyrs for a small fee. In our small, private tasting session we started off with the Slyrs Single Malt Classic, tried the Sauternes Finish and the 12-Year-Old. We also had a sip of the Bavarian Cream Liqueur which is very oily and velvety. Even though I am not a fan of cream liqueurs, I must admit that this one is quite good!

The Slyrs Classic really is a very mellow Single Malt. There are typical whisky notes of caramel and vanilla all complimented by a malty backbone. When tasting it alone, the Classic also manages to hide its youth. Only when coming back to it after a while, you will notice a certain oak flavour from the new barrels. However, this is an excellent whisky when you are craving something lighter or for introducing people to whisky.

Right from the start the Sauternes Finish is another calibre indeed! You will be immediately be welcomed by sweet wine notes in the bouquet and fruity flavours in the taste. The Sauternes Finish is less dominant than the PX Finish, but still you should take your time to enjoy the complex combination of distillery character and cask finishing.

There is a grave difference between the 12-Year-Old Slyrs and the Classic. The juvenile notes are replaced by a complex net of malt and oak flavours, interlaced to form an almost perfect sensory impression. I expected the oldest member of the Slyrs family to be good, but I still was surprised about how great it was. This again is a perfect example for whisky needing time to become excellent. 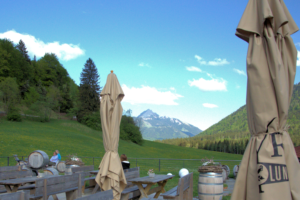 Terrace of the Slyrs Lunchery

In the end, I strongly suggest that you visit the Slyrs distillery! This does not only apply for whisky connoisseurs, but for everybody who wants to experience excellent craftsman- and entrepreneurship. You can even just stop by for having breakfast or a cup of coffee in the Caffee & Lunchery. Finally, I want to thank Franziska very much for an excellent tour and answering all our questions!