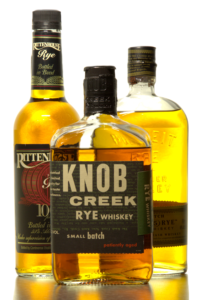 With the shortage of the past years finally over more and more Rye Whiskey is becoming available. However, that leaves you with a problem: which one is best?


To answer that question, I choose three contenders that should compete in a Rye Whiskey smack down, although admittedly I am not the first one to do such a test.

As it was clear to me that I could not do this test alone, I invited some friends to help me out with this strenuous task. Luckily I did not have to do much persuasion work to win them over. The rules were pretty simple: The Whiskeys would have to stand up to a few tests and in the end there would be a winner. Of course we would have to try them neat, but who really enjoys it that way? So I decided the contestants would have to master three drinks, too. Poor guys…

My choice fell on the Bulleit Rye, Knob Creek Rye and Rittenhouse Bottled In Bond. While the first and the last ones where the obvious choices, because they are in a similar price range, the Knob Creek is rather expensive here in Germany. But, since a lot of my readers are from the United States and I happened to have a bottle at hand I decided to include it anyway.

Another hard decision I had to face were the drinks for the test. They should represent the main areas of application of Rye whiskey, while not being the usual boring stuff, like a Rye sour. The only thing I was sure was that one of the drinks had to be a Manhattan. It’s the most famous Rye Whiskey cocktail, it’s a classic and one of my favorites.

One drink also had to be kind of a sour, but a bit more sophistication would be nice, I thought. So at first I tried the Oriental, a mix of Rye, sweet vermouth, orange curacao and lime juice. While being not a bad drink, it was a bit unbalanced in my opinion. I also think that lemon works way better with Rye than lime, or whisky in general for that matter. After a little while I consulted my PDT Cocktail book and the drink that seemed to fit the profile was the Ward Eight. It’s basically a Rye sour with the addition of orange juice and grenadine.

With only one drink to go I turned to another famous bartender (besides Jim Meehan): Jamie Boudreau’s Dunkin Cocktail is my second favorite Rye Whiskey cocktail. It’s a drink where the subtle flavors in a whiskey can shine through, at the same time too bold ones can ruin it.

With all whiskeys and cocktails accounted for my friends and I set to work.

First I will give you the results of tasting the whiskeys neat and after that the different drinks with recipes and score. In the end you will find the overall score. The evaluation scale reaches from 0 (not drinkable) to 5 (best ever tasted). 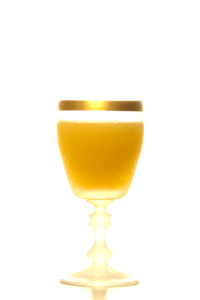 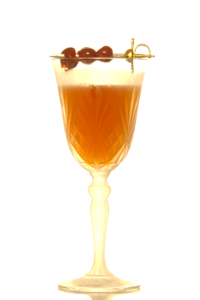 One thing I forgot to consider is the winner of the cocktail challenge. Here the Bulleit Rye wins, because of its four point score in the Manhattan.

The overall standings change when considering the neat tasting score. After all the Bulleit loses and the Knob Creek wins. The things I draw from this are: On the one hand I would suggest the Bulleit for people who have not much experience with Rye Whiskey. On the other hand I would recommend the Knob Creek to the more experienced whiskey drinker.

I have to say that I am a little bit surprised by the result. I wouldn’t have bet on the Knob Creek to win, simply because I thought of it as an enhanced Jim Beam Yellow Label. Nevertheless, it seems to be a good all-rounder in the tested drinks, while the other two score better in a Manhattan. What doesn’t surprise me is that the weakest Whiskey wins here. In a Manhattan there really isn’t much to hide the booze.

All in all don’t be irritated by the score that seems a bit low. My friends aren’t bartenders, so it was their first real liquor tasting and at least one of them wasn’t a big fan of whisky. Even for me it was quite exhausting, to tell the difference between three similar drinks as the night progressed. However, that didn’t keep us from doing a Bourbon tasting, too.