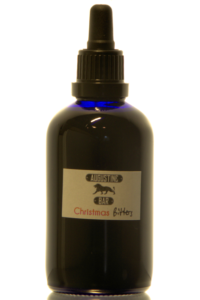 Some time ago I published my first article on making bitters. Which basically gives you everything you need to create your own style of bitters. However, there are also defunct bitters out there and some people would like to know what they taste like. Of course, all attempts at recreating them will never resemble the original to 100 %, but still you will come closer to a recipe calling for them as with bitters you can buy.

Now in this case I am not talking about fancy vintage bitters like Abbott’s Bitters or Hermes Orange Bitters. Instead I received an email of an avid reader, that he was in search for the not longer available Dr. Heather Duncan Christmas Bitters. His question was, if I could post a recipe how to make them yourself. Now, before I start telling you how to make them I have to tell you two things beforehand. First, as already mentioned this recipe will not taste like the original bitters you could have bought, but instead has a similar flavour. Second, I only made them out of curiosity if I could produce tasty bitters suitable for Christmas, not out of any commercial reasons. Third, no I will not continue to make every request for ingredients I get…

To even get the chance to replicate the flavour of the Christmas Bitters produced by Dr. Elmegirab I first had to do a little research. Luckily, you will find quite a lot of information on the ingredients at different websites – despite the fact that it is supposed to be secret ingredient. The first thing I found out was that the bitters were invented by Dr. Heather Duncan after hearing a lecture from Dr. Elmegirab on producing bitters. After the lecture she went to him and told him that she thought that she can make her own bitters. He replied: “You could not make bitters”, which just inspired Dr. Duncan more to proof him wrong. After a while she came up with a recipe that was so good, that Dr. Elmegirab just had to produce them in larger batches and sell them as a limited release. As Dr. Elmegirab tells on his blog he first neglected the project, but after a while “elfs” started to just producing them without him.

As the headline already describes the spirit base for the bitters is overproof rum, which is enhanced with quite a few ingredients. All in all, the ingredients list reads like a recipe for fruit bread. There are berries, citrus fruits, port and spices. Let’s start with the so called bittering agent: The only hint we get from the product description is that there are three roots used for bitterness. Since the overall result is said to taste like ginger bread I just went ahead and choose one of those roots to be ginger. The two other roots I had on hand were galangal and gentian, so I just threw them in the mix as well. When it comes to the ingredients things get a bit easier, because basically all the them are listed on different websites. This means that also allspice, cacao, cloves, cinnamon, cranberries, lemon peel, mace, nutmeg, orange peel, raisins and star anise are used in the mix. One thing to keep in mind though is that you will not find the quantities anywhere, this means that a bit of experimenting is in order! 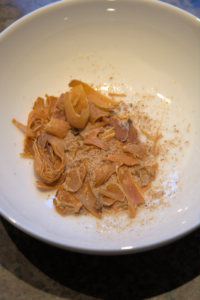 As I said, I already told you the basic rules when it comes to making bitters in the old article. Yet, let us just take a quick look at the most important rules. First, use clean glassware, which actually should be a no-brainer, but still. The easiest way to make sure is to wash each individual container with boiling water before you add the ingredients. However, to prevent any lawsuits here I am of course obligated to tell you that you should be careful when handling boiling water – it is very, very hot after all! Second, use different containers and infuse the botanicals separately if possible. This one might even be the most important thing to keep in mind, because each individual ingredient will take different time to release its flavour to the alcohol. In this case it took the gentian only 20 min to give the rum quite a bitter punch, anything more would have probably been too much. Now, I have to admit that I’m a little hypocrite when telling you this, because this time I did not have enough empty containers on hand. So, I through all the spices and the 99 % cacao bar into one preserving jar. This resulted in a very spicy, but less chocolate like taste of the infusion. Also, I just used one container for the galangal and ginger which I could have spotted as a mistake right away because the former was already dried and the ginger fresh… Bellow you find the different infusions I used to create the bitters. Luckily I timed the maceration times so that I could use all of the remaining liquid and just mix them in a large bowl. 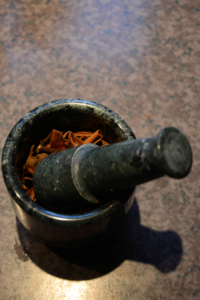 It should be a no-brainer that you try your different infusions every day and a daily shake could also do no harm. When you are happy with the individual results you should strain your infusions and mix them. My advise here is to start with the least powerful or the best tasting liquid and work your way to the more powerful and bitter infusions. As I mentioned earlier in my case I got the times right and could use all the liquid there was left in the containers. Afterwards I added 50 ml of water and 100 ml ten year old Tawny Port to bring the bitters to “drinking strength” and to smooth out the taste a bit. Usually there a no recipes using your homemade bitters and you have to come up with your own. However, in this case there are some recipes out there who call for the Dr. Heather Duncan Christmas Bitters.