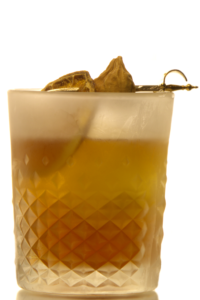 I guess it is nothing new that a lot of so called trends are born in the United States and slowly make their way to Germany. After Gin, in my mind the next big thing are low alcoholic spirits like Amaros and vermouths. One case in point is the relatively new Amanero Amaro. After the Mondino this is the second product from the small Schnitzer distillery here in Bavarian I want to introduce to you!

The Mondino Amaro Bavarese, already managed to win me over completely. Its alluring combination of bitterness and fruit aroma makes it the ideal ingredient for both classic and modern cocktails. Naturally, I also was intrigued by the new product from the Schnitzer distillery, the Amanero Amaro. I would say it takes guts to make another Amaro your second new product! However, if you already have an Italian inspired recipe on hand it might just be the logical next step. In the case of the Amanero the recipe was developed by Schnitzer’s master distiller after years as an apprentice in Italy. The secret family recipe consists of thirty different herbal essences, which are blended together to create this typical Italian digestive. Some of the ingredients are said to be artichokes, grown near Munich and brewed espresso from Arabica coffee. After the assemblage of the different ingredients, the liqueur is rested for several months in oak barrels. This is just about everything you will find out about the Amanero on the internet, because the official homepage is still under construction. 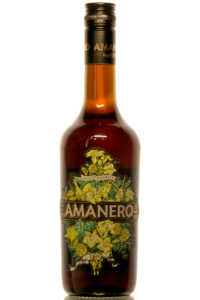 On the off chance that I repeat myself, but the Amanero Amaro is damn good! As with the Mondino Amaro, there just is an almost perfect balance between herbal bitterness, spiciness and sweetness. Of course, I am far from detecting all of the thirty ingredients, but still you can make out some of them. In my mind you can clearly recognize cloves, mint and ginger. Yet, everybody probably might find different aromas in this liqueur. Another thing the Amanero has in common with its sister product is that it does not copy other prominent Amaros. It manages to create its own long lasting sensory impression. Besides, all that praise we need to move on to my drink creation with the Amanero now.

The beginning of the end

First, I want to talk a little bit about the cocktail’s name. Since the Amanero is meant to be drunk as an digestive which means that it is the conclusion of a lavish meal. So, I thought the title of this Editors song would be just the right name for my creation. Apart from the name, I took Robert Hess’s Trident, which also is a twist on a classic Amaro cocktail, as a starting point. Instead of aquavit I used Armagnac, because this aromatic brandy is better suited for Winter and the Amanero already brings enough herbal aromas to the mix. I kept the Sherry from the original recipe, but to give the cocktail a little bit more fruitiness, I also added 1,5 cl Orange Curacao. Obviously, this means that the “An End Has A Start” is no longer a classic three piece cocktail, but it really benefits from the additional orange notes.

Before getting into the flavour profile of this drink, first some advice: If your guests are not used to Amaro cocktails or still consider Amaros as “medicine”, this probably is not the right choice for them. However, if your company and you enjoy the occasional Apotheke cocktail or Negroni you should give this one a try! Of course, the first thing you will taste is a combination of intensive herbal notes and noticeable bitterness. In some way the Amanero’s bitter notes are stressed by the rest of the ingredients. Still, you also get quite a few fruity brandy and orange notes, together with a slight caramel like sweetness. What I especially like about this cocktail is that the Amanero is clearly the dominant flavour, even when paired with other strong ingredients. Still, this does not mean that the other flavours are completely suppressed, they rather form a complex setting for the Amaro.

The end of the end

Looking back at the beginning of this review, it now makes complete sense that Schnitzer created another Amaro. While the Mondino is best drunk before a good dinner – the Amanero is the right way to finish it. It does not matter if you drink it on its own as a digestive, or in form of an after-dinner cocktail, it certainly will be the right way to enjoy the end of a great evening!