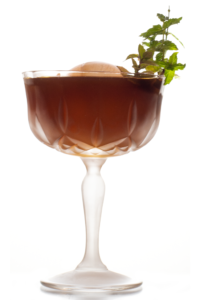 The next bottle up for the One Bottle One Drink series in the spirits cabinet is Cynar. Since it has a distinct bitterness there are just people out there who either love or hate this Italian Amaro made from artichokes! Obviously, as a bartenders or cocktail enthusiasts you just have to belong to the first group. – Seriously, I would never persuade anyone with a sensitive palate to drink Cynar. But if you like Amaros, there’s no way around this dark brown elixir!

Like already mentioned, Cynar is based on the leaves of artichokes. However, there are also 13 infusions of herbs added to the recipe.  After its creation by Angelo Dalle Molle in Venetia, Cynar was distributed in Italy starting in 1952. It was made popular in Italy through a series of commercials where actor Ferruccio De Ceresa drank Cynar in busy streets. Unfortunately, the 70 proof (35 % ABV) version of Cynar is only available in the USA.

This is due to the fact, that in the USA there is an Amaro-craze with even Amaro themed bars opening up. So, it also does not come as a surprise that there are a great amount of cocktails using it. Yet, my choice fell on the “The Art Of Choke”. The drink was created in 2007 by Kyle Davidson at the Violet Hour in Chicago. While it is similar to the “Drink of Laughter And Forgetting”, the addition of white rum and mint, gives the drink an almost exotic feeling. Yet, it clearly remains dominated by the Cynar. However, you still have to keep in mind, that this drink is not for everybody. As already mentioned, you really have to like the bitter taste of Amaros to enjoy this cocktail. Apart from that, “The Art Of Choke” is a great drink! 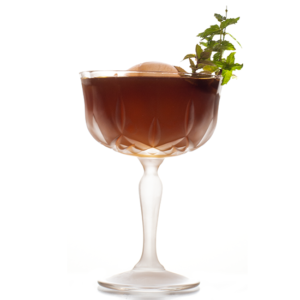