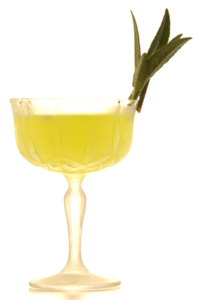 Believe it or not, but even I am sometimes too lazy to use exotic ingredients in my cocktails. You simply get tired of using unripe dried mango powder in a cocktail after a while… In those moments I settle for just mixing up a twist on a classic cocktail. So guess which classic cocktail I used as a base here?

As you probably guessed from the headline my cocktail is a riff on the Last Word cocktail, as almost every modern drink with “last” in the name. The Last Word itself was a long time bartender’s favourite and supposedly was invented at the Detroit Athletic Club during Prohibition. – A minimum requirement to become a favourite cocktail amongst moustached bartenders. While enjoying the occasional Last Word, I myself, always favoured the variation with Mezcal instead of gin. This variation is called La Ultima Palabra and the smokiness of the Mezcal goes very well with the herbal Chartreuse notes and dry cherry aroma of the Maraschino. Nevertheless, this time I wanted to stick with gin and just replaced all the other ingredients.

Don’t worry, you can still recognize the cocktail as a twist on the Last Word, even though I switched everything apart from the gin. However, the art here is to use a different, but still similar ingredient to the original one. So I switched the green for yellow Chartreuse and the lime juice for lemon. Malicious tongues might say I simply ran out of limes, but there is absolutely no proof for that! At first I wanted to keep the Maraschino in the mix, but while collecting the different bottles from my shelf, my eyes fell on the Nardini Acqua Di Cedro, which I only used once before. As far as my memory served me right this Italian citrus liqueur was also not too sweet and I simply went for it. Still, this recipe would not be recognizable as one of mine if there was not some kind of crazy stuff going on.

This sage is on fire!

As with the Lightning In A Bottle cocktail, I set some sprigs of sage on fire, because I wanted to add a little bit of smokiness to the drink. Sure, this time I could have used another herb, but this year my sage shrub in the garden was simply glorious with a lot of perfect and large leaves. Besides that, I absolutely love sage on any kind of Mediterranean dish. Also I have a top-tip for you. If you want to set something on fire, do not wash it beforehand, or at least let it completely dry before you put the flame to it. Otherwise you will end up with not much smoke at all… Of course, it goes without saying that, if you do play with fire you at least should do it above a non-combustible surface and keep the flame away from booze!

Beside the lack of cherry and bitter almond flavour which would have come from the Maraschino, you are still able to taste the roots of this cocktail. As I had planned the Chartreuse notes were less prominent and there was a interesting lemon note, too. No, I am not only talking about the acidic taste of the lemon juice, but rather a more complex fruit note reminiscent of freshly cut lemon peel. Beneath it all there lies a slight smoky taste of burned sage, which also did not overwhelm the whole drinking experience. For me this drink is a fun way of enjoying a Last Word like cocktail, without swamping your palate. This also would have been perfect for warm late summer evenings. – Not that we will have the chance to verify that anytime soon…