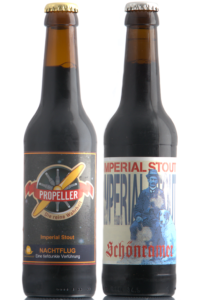 Imperial Stouts are probably the second most popular “craft” beer on the market right now, after IPAs of course. However, sometimes it is hard to taste other flavours besides alcohol and heavy malt notes in this style of beer. Maybe, these two particular Imperial Stouts can proof me wrong!

Imperial Stouts were invented in the 18th century by the British royal court for the tsarina Katharina. It was very popular in England and Russia, but like other beer styles was almost forgotten. Nowadays, a lot of brewers rediscovered this malt heavy and strong beer style. For instance the Propeller drinks company produces a Imperial Stout called “Nachtflug” at the Bosch Brewery in Westphalia. They are using a lot of roasted malts which give the beer its dark colour. In the end the resulting beer as an original wort of 20 ° Plato, 45 IBU and 9,1 % ABV. 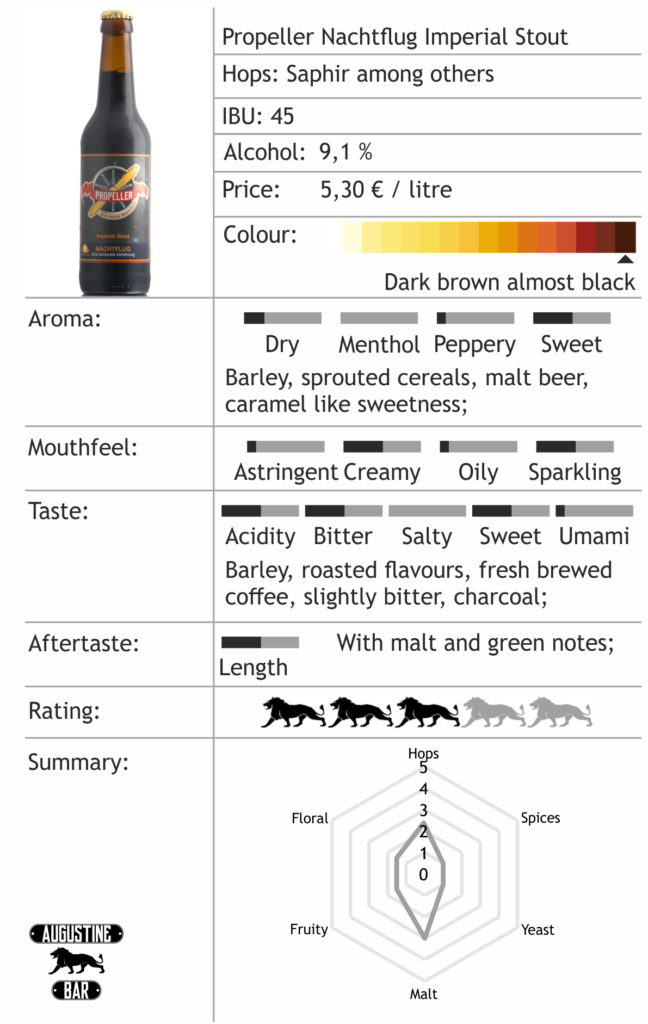 The Schoenramer Imperial Stout is produced at the Schoenram Brewery in Bavaria by brewer Eric Toft. It is part of there “speciality beer” line, which also includes a Bavarian Ale, an Indian Pale Ale and three seasonal ales. The Imperial Stout is bottled with 22 ° Plato, 55 IBU and an ABV of 9,5 %.

While both Imperial Stouts have all the typical elements of this specific beer style, the Schoenramer is a little bit more sophisticated. There is a lot of malt flavour, a slight caramel sweetness and a medium bitterness in each of them. However, the Schoenramer also carries citrus and slightly smoky flavours. On top of that, the Propeller Imperial Stout has more coffee and roasted flavours like taste, while the Schoenramer is more on the sprouted barley side. It is funny how three years down the line, my perception of the Schoenramer has changed: In 2014 I criticised the two powerful smoke aroma. However, now I only sense a slight hint of smoke in it and because of the more balanced taste it also receives a higher rating.