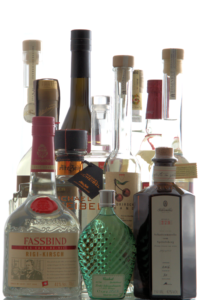 To keep up the tradition of a blind tasting a year, I also decided to hold one this year. However, the topic of this year’s tasting are cherry eau de vies. Sure, eau de vies are in general easily overlooked, but after apple and pear eau de vies, cherries only come in third place when thinking of fruit brandies. Therefore, I decided to take a closer look at this interesting eau de vie category! 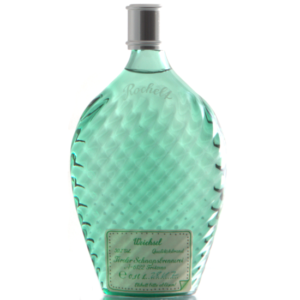 Well, most of us just know the difference between sour and sweet cherries, but only little more than that. The cherry in general is a subspecies of the genus Prunus. There are the aforementioned sweet cherries Prunus avium and sour cherries Prunus cerasus. Sour cherries are believed to be a natural hybrid between the sweet cherry and the dwarf cherry (Prunus fruticosa). They seem to originate from the Iranian plateau or Eastern Europe. As their name suggests sour cherries contain more acidity than their sweet counterpart. The wild cherry (Prunus avium subsp. avium) grows in an area ranging from Northern Africa to Southern Scandinavia. The heart cherry (Prunus avium subsp. juliana) is a cultivated form of the wild cherry and today also other species of Prunus may be referred to as wild cherries. After this short excursion into the lineage of cherries, let us get to the tasting itself! 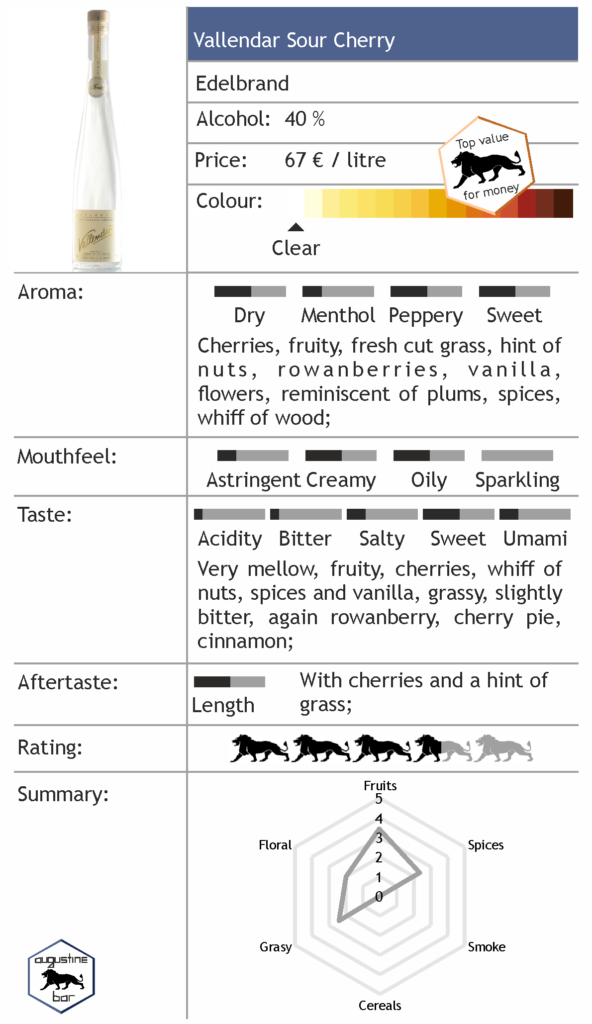 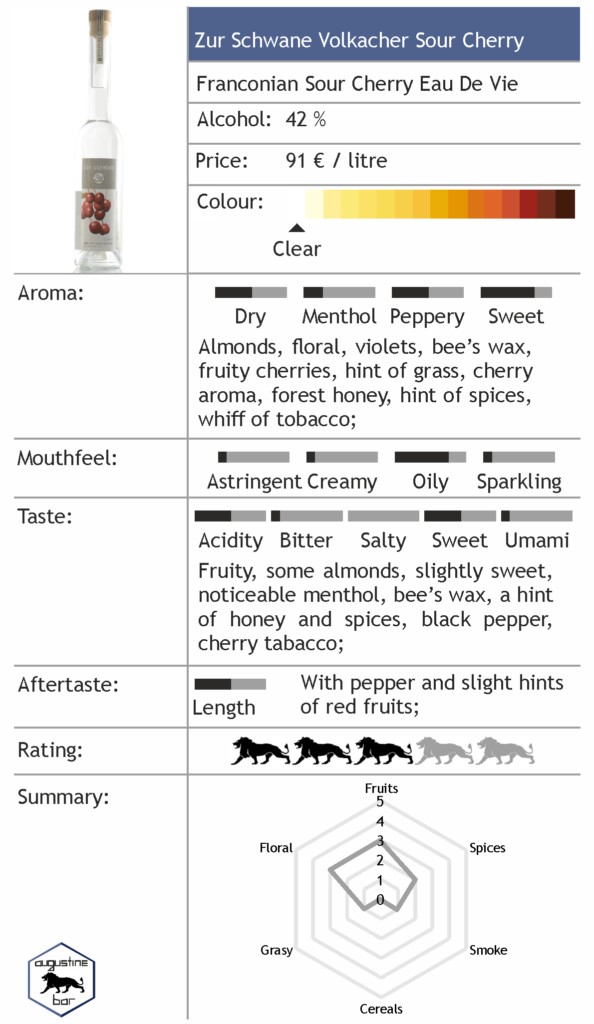 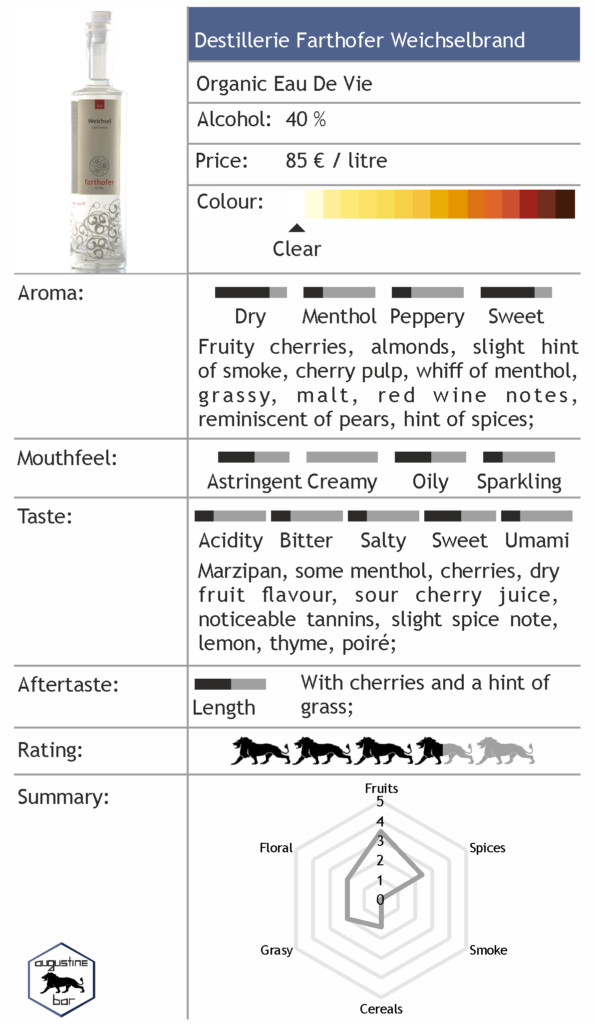 The first flight consisted of three sour cherry brandies from Vallendar, Zur Schwane and Farthofer. The Vallendar Sour Cherry Eau De Vie is distilled from Eggener valley cherries harvested without the stem right before they are full ripe. Before fermentation, the seeds are removed by straining and distillation is done at low temperatures. In my opinion the Vallendar included certain rowanberry elements, while the Zur Schwane tasted of honey. The cherries for the Zur Schwane Sour Cherry Eau De Vie come from Volkach a village famous for its wine in Franconia. It is distilled from perfectly ripe fruits and bottled without filtration. Very full ripe cherries of the “Zigeunerweichsel” variety, are used for the Farthofer Weichsel. It had the most intense cherry stone aroma of the three eau de vies and certain herbal notes. All three of them had a mild cherry flavour in common, with the differences in flavour and the respective ratings being marginal. 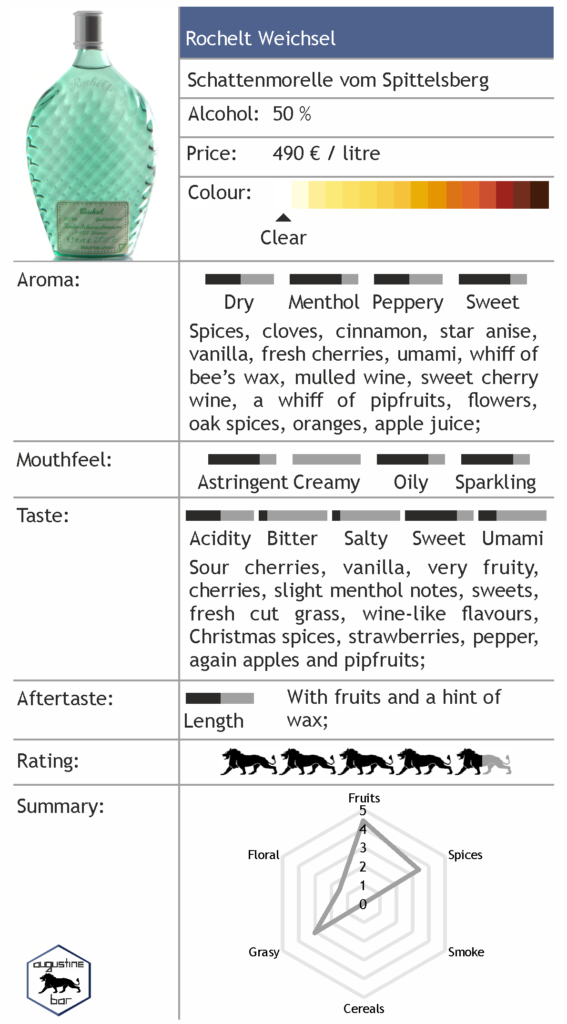 Only two eau de vies comprised the second flight of sour cherry eau de vies. However, this flight was quite worth it! The first eau de vie came from the soon defunct Stählemühle distillery and the second one from renown Austrian producer Rochelt. The Stählemühle Schattenmorelle vom Spittelsberg comes from the orchards of the count Bodman at the Spittelsberg in Ludwigshafen. The cherries are harvested when they fall from the tree and only the ones from the most Southern row of trees are used. The Rochelt Weichsel is distilled from Morello cherries from western Styria and matured for 12 years. To come to the point, they scored very high. Yet, their intense flavours also overwhelmed some of the tasters. This is the only reason why both of them got the 4.5 lion rating instead of the full 5 lions. 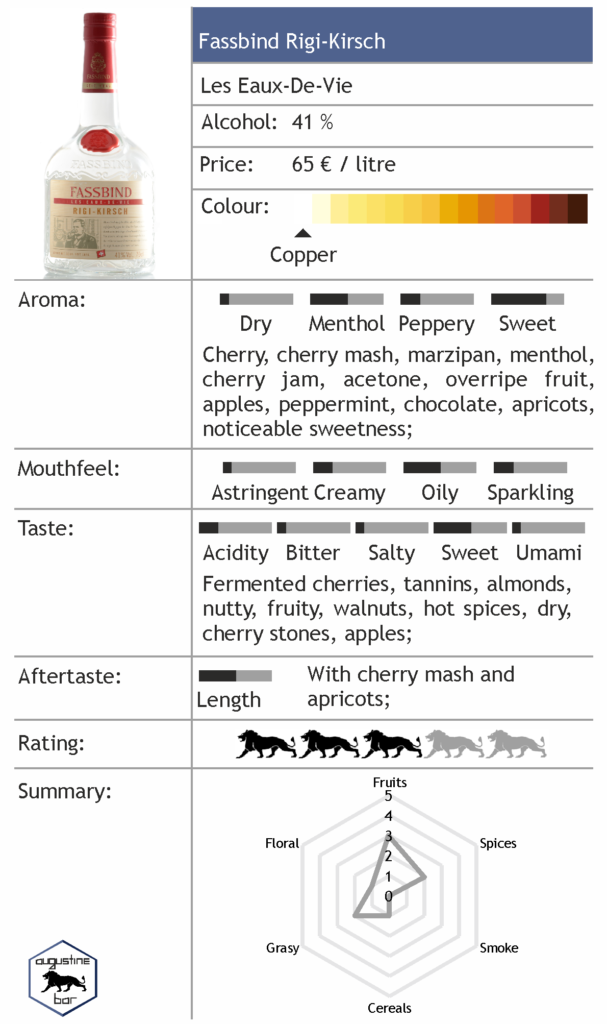 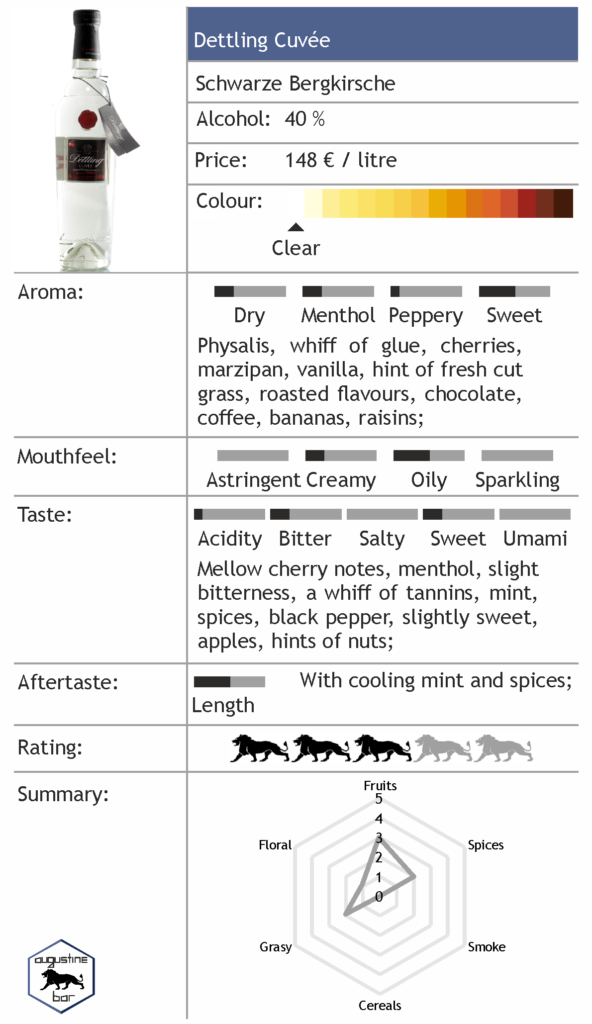 The more classic cherry eau de vie flight consisted of the Fassbind Rigi Kirsch, the Schladerer Markgräfler Chriesiwässerli and the Dettling Cuvée Black Mountain Cherry. The Rigi Kirsch, which is part of the Eaux-de-vie series, is distilled from cherries grown in Central Switzerland. After distillation in a counter-current process, the cherry brandy matures for another year in Fassbind’s cellar. Its unique characteristic is its taste of fermented cherries in combination with clear stone aromas. Although the Markgräfler Chriesiwässerli is cask aged, I still decided to include it in this tasting. Since not all the cherry brandy is aged in the rather neutral ash wood, I think it is comparable to the other eau de vies in this flight. Best quality distilling cherries from the Markgräflerland region are fermented temperature controlled without their stones being removed. After its ageing for five years the cherry eau de vie is bottled at 50 % ABV. The resulting flavour was dominated by sweet and dried cherry notes, with maybe a little hint of smoke from the barrel ageing. The last eau de vie in this flight, the Dettling Black Mountain Cherry, is a cuvée of different eau de vies from black mountain cherries. They are directly fermented after the harvest, distilled and matured for a short time. The resulting eau de vie had interesting notes of exotic fruits and spices. 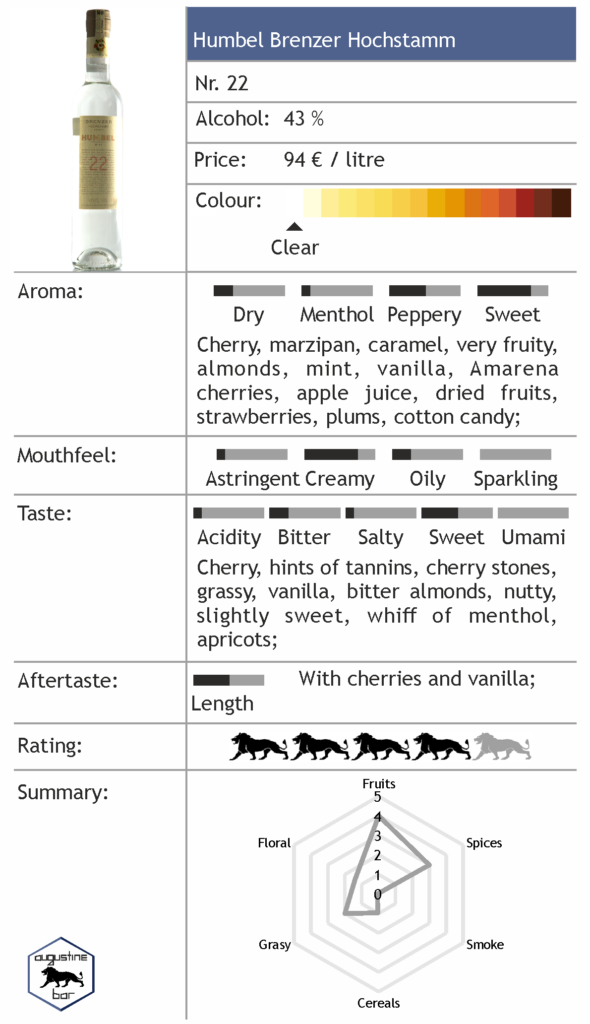 In flight four were also only two eau de vies one from  Gölles and the other one from Humbel. For the Gölles Heart Cherry Eau De Vie 10 kg of fruits harvested in July are fermented without a stone. After the double distillation on copper stills, the spirit matures for two years in demijohns. It is surprisingly spicy and complex. In contrast, the Humbel Nr. 22 Brenzer Kirsch is distilled from standard orchard cherries from North-western and Central Switzerland. It has noticeable cherry stone notes and a distinct fruitiness. 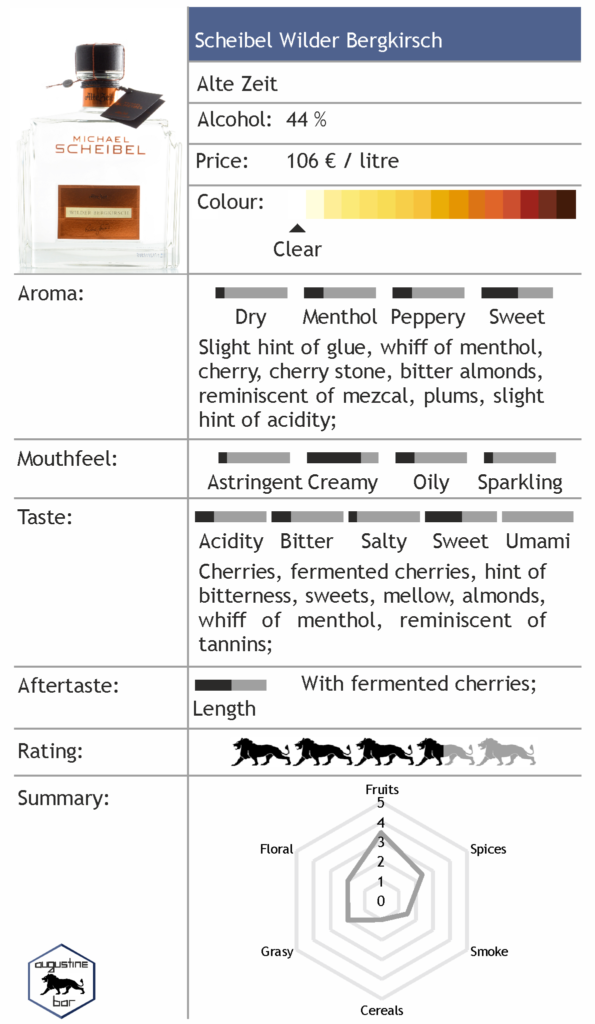 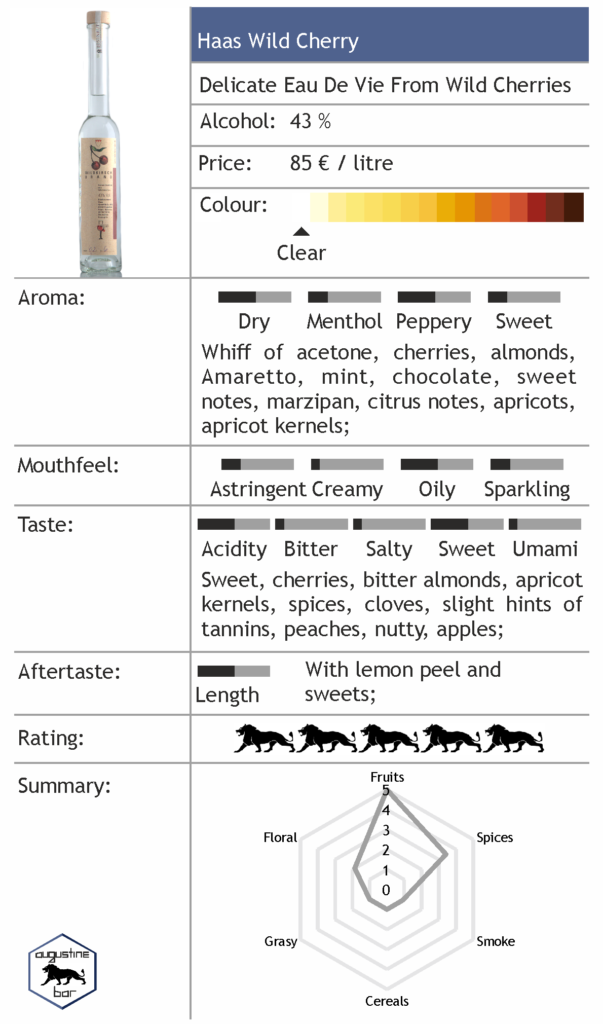 The last three eau de vies we tasted were wild cherry eau de vies from Scheibel, Haas and Dettling. The Scheibel Alte Zeit Wild Mountain Cherry is distilled from small, almost black mountain cherries. The distillation is done on a wood-fired still with a capacity of 320 litres after a temperature controlled fermentation. Besides its wild cherry aroma there are complex almond notes and a hint of tannins. The Haas Wild Cherry Eau De Vie comes from a local producer in Pretzfeld Franconia and is distilled on copper stills. With a multitude of ripe fruit notes and stone flavours the Haas Wild Cherry Eau De Vie was the most surprising of the spirits tested. The Dettling Wild Cherry is only distilled in special years from small cherries with a high sugar content. The resulting eau de vie has a heavy wild cherry note with funky elements.

For me the most interesting part of the tasting was the difference between the individual types of cherry eau de vies. It is very impressive to see what a wide range of flavours a single fruit can offer. Of course, there were personal favourites and antipathies, but all the cherry brandy we tried were good and of high quality. Some of them were even exceptionally good, as you can see from the ratings above. My advice at the end is, that you should give this underappreciated spirits category a try and find your personal favourites!