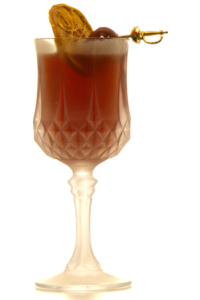 Iceland probably is famous for many great things (e.g. volcanoes), but one thing I never figured is that they would become famous for spirits. Nevertheless, this is already the second product I am reviewing from this small island in the North. The VOR Gin and the Viti Aquavite are both distilled at the Eimverk Distillery and strictly according to the principle of “from grain to glass”.

In contrast to the gin, it does not come as such a big surprise that aquavit is distilled in Iceland. There are multiple reasons for that and the most obvious is that in many Northern countries aquavit was the spirit of choice for many years. Apart from that, the main ingredient for aquavit, caraway seeds, grow wild in Iceland. It is said that there were introduced to the island by Irish monks early as 800 A.D.. Naturally, it was just a matter of time until someone started to distil the spice to get booze out of it. In case of the Viti Brenninvin, as aquavit is called in Iceland, the recipe is said to date back to the 18th century.

Did you just say kale?

Aside from the caraway seeds a whole bunch of other botanicals are used to create the Viti and all of them are native to Iceland. I will just give them to you in alphabetic order and you can let them sink in: Angelica root, birch leaves, creeping thyme, Icelandic moss, kale, meadow sweet and rhubarb. Yes, this spirit is actually using kale as an ingredient! For my avid readers this should not come as a surprise, because the VOR Gin also used similar botanicals and it was a great, but somehow unusual drinking experience. The last ingredient that is used to produce this aquavit is pure pot still spirit made out of Icelandic barley. As I already told you, strictly grain to glass! 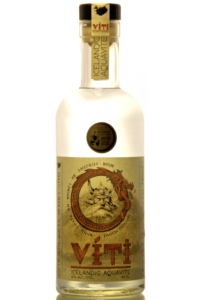 Torben from Trinklaune sums it all up when he describes the Viti Aquavite as wicked stuff! Basically, the Viti does the same thing the VOR Gin did before: It takes everything you expect from the spirit category, puts it in a bag and smashes it with a club! However, the Viti does everything just a little bit better than the VOR Gin. For me the combination of botanicals better suits the flavour profile of an aquavit. Naturally, its most prominent flavour are caraway seeds, but there is much more to it… Probably, the second thing you will notice when trying this are its notes of full ripe pip fruits. I reckon that they have their source in the Icelandic malted barley and I also associate this special taste with other craft spirits made out of barley. Maybe the reason for that is the specific barley used, or the use of small maltings. Nevertheless, there are also many, many more herbal notes to detect even if it might be a bit hard to put your finger on what they are specifically. One final word on the Viti’s taste: this is really freaky stuff and bartenders mixologists really will not get bored by this. However, this also means the Viti probably will not become the favourite of “normal” spirits connoisseurs. Before we get to the drink in question, let me as well tell something on the vermouth I used. Just like in the last drink I presented to you I also used a Belsazar Vermouth in this and I will not bore you with the details. You can read more on them in the article on the Thunderball cocktail. 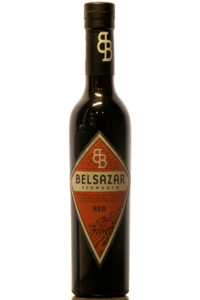 Some years ago I had a drink idea that also involved aquavit, but until now I did not manage to get all of the ingredients. For most of you this will not come as a surprise considering the exotic and unusual ingredients I am used to mixing with. With this cocktail blueprint I wanted to use a mix of aquavit, Chartreuse V.E.P. Jaune, Barolo Chinato and Bittermens Orange Cream Citrate. I think now it becomes clear why I did not get the chance to mix this drink until now. Still, with the Viti on hand I at least wanted to try something similar. So, instead of the V.E.P. I used Chartreuse M.O.F.S., the limited version created by the Chartusian monks for the guild of French Master Sommeliers. To recreate the flavour of a Barolo Chinato I used German vermouth in combination with a homemade tonic syrup. Obviously, the name for the cocktail is also the title of a song. In this case I made sure that there was a Icelandic vibe to it! This might not be visible on first glance, but the song “Fire Dies Down” is from Seabear, which is / are an Icelandic artist / group. Moreover, the song is a little bit wired, just like this drink with Viti.

Undoubtedly, I do not want to compliment myself on my own cocktail creation, but as a colleague at work remarked on employees: “There are good employees and there are better ones!”. In general this also applies for my recipes and this definitely is amongst the better ones! On the one hand, there are just so many levels to the taste of this cocktail that every sip delivers a new sensation to your palate. However, on the other hand all the different aromas are beautifully integrated and interlaced. If I had to describe this drink with different sensory adjectives I would tell you that it has a herbal and winey aroma in addition to caraway and Chartreuse notes. In the aftertaste you also get a slight hint of quinine flavour, but the bitterness at no point becomes overwhelming. Yet, it does not really make sense here to list all the different flavours, because there is just so much going on! This drink will absolutely become one of my standard go to aquavit drinks. – Yes, there is such a category in my drinks repertoire!