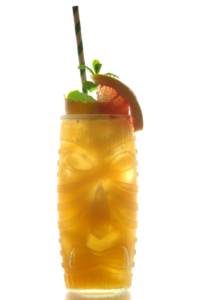 The second instalment of this years Tiki month is also based on another classic Tiki cocktail, the Zombie! There is no better drink suited for a new overproof rum than this deadly and iconic Don the Beachcomber drink! The rum itself, the Plantation O.F.T.D. is the newest addition to the diverse line up of Plantation Rum and was developed with a top class of rum experts from all over the world!

In total Alexander Gabriel, master blender of Planation Rum and Ferrand Cognac, gathered six rum experts: Jeff “Beachbum” Berry, cocktail historian David Wondrich, Martin Cate from Smuggler’s Cove, San Francisco, Paul McFadyen from Trailer Happiness, London, Paul McGee from Lost Lake, Chicago and Scotty Schuder from Dirty Dick, Paris to help him create his new expression of overproof rum. They settled on a blend of rum from Barbados, Guyana and Jamaica and it replaces the regular single origin Plantation Original Dark Overproof. Rumour has it that the older portions of the old Original Dark blend are exhausted. This probably was also the reason why back in 2015 the regular strength Original Dark blend was changed to a mix of rum from Trinidad and Jamaica.

There are two types of esters in my rum! 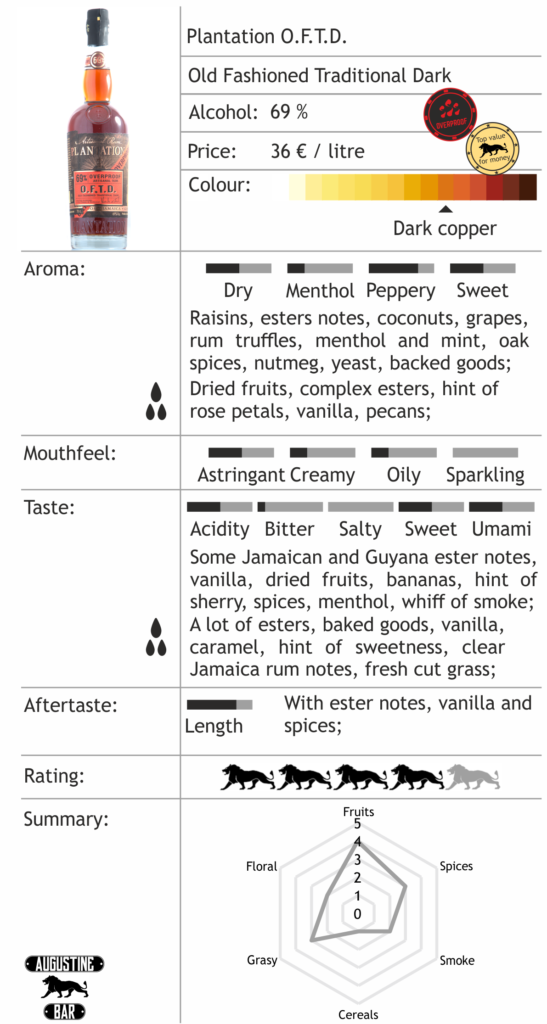 Unfortunately, I never had the change to try the old Original Dark Overproof Rum, but nevertheless the O.F.T.D. makes more than up for it! First, the aroma of rum is a bit restrained, it takes some air and / or a few drops of water to open up the different flavours. If you manage to do so you will be rewarded with a great combination of different ester notes. Yes, there are more than one type of them! On the one hand, there a overripe banana-like flavours that come from the Jamaica portion of the blend. On the other hand, you will also find darker and drier esters which stem from the Guyana rum. Apart from the esters, there are a lot of backing spices, some yeast and of course also some molasses flavours in the sip. I guess the Barbados rum is what brings the two very powerful other parts of the mix together, because it is otherwise not really noticeable apart from a certain sweet vanilla note.

The dead and the furious

Well, since I wanted to create a Zombie variation I also needed a suitable name! Luckily, I found a song by a Tiki band called Los Tiki Phantoms which was the perfect match. However, let us talk about the recipe for the drink! It might seem a bit excessive to combine three aged rums, which themselves are multi island blends. Yet, it is a Tiki drink! This means that it is virtually impossible to overdo with the rum. Instead of the Falernum used in the Zombie recipe, I went for vanilla liqueur and Chartreuse to spice up the whole thing. I combined regular and pink grapefruit juice to replace the original combination of grapefruit and lime. The reason for that is simple, pink grapefruit juice has less acidity and a more pleasant taste, but when used solely the drink would lack a little bit of freshness. So, I just added the same amount of white grapefruit juice to make the drink a little bit more refreshing. 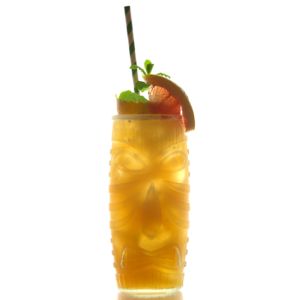 The “Muertos Y Furiosos” is clearly dominated by the rum blend, especially the O.F.T.D.’s ester notes are still noticeable in the final drink. Apart from the rum, the next thing you will notice are the cloves in combination with slightly suppressed vanilla notes. The Chartreuse and the grapefruit juice are acting as “mortar” ingredients, bringing all the individual flavours together. As with all Tiki drinks, and especially when keeping in mind that this is supposed to be a Zombie variation, you should definitely be sip it carefully! There was a reason that you could just order one per evening at Don The Bechcomber’s.