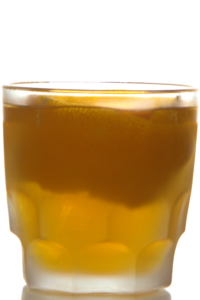 Continuing the short excursion into Amaros with a representative, not from Italy, but from Germany. Windspiel, the gin producer from the Eifel region, broadened its product portfolio with a herbal spirit. This potato vodka based liqueur is set out to show that high quality bittersweet liqueurs do not necessarily have to come from South European countries!

The idea for the Windspiel Kraut & Knolle is said to be more than two years old. However, it took all of this time to bring the recipe to perfection. The Kraut & Knolle is made from a combination of different distillates and macerations containing locally grown chamomile, cherries, hay, mullein blossoms, nettles, spruce needles, St. John’s wort and walnuts. On top of that, foreign ingredients like cardamom, cinnamon and oranges add more spicy and fruity notes. The sweetness of the spirit is lower than the one demanded for liqueurs. 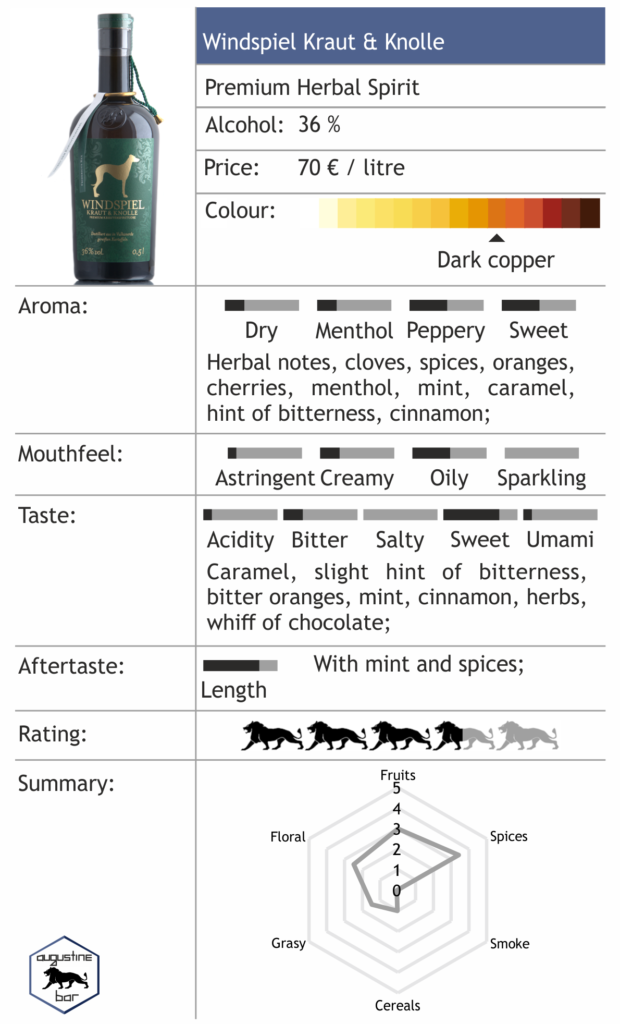 The Kraut & Knolle has a great aroma of power full herbs and spices. Yet, it is relatively smooth on the tongue with just the right amount of bitterness to compete with the big Italian bitter digestives. Mainly you will notice the chamomile, cherry cinnamon and oranges. There is just enough sweetness to round out the flavour, without overpowering any herbal flavours. This makes the Windspiel very well balanced and suitable for sipping neat, as well as a bunch of classic, spirit forward cocktails.

I took one of those classic cocktails, the Negroni, as an inspiration for the Slomo cocktail. Sticking to the principle of “what grows together, goes together” I chose the Windspiel Gin as a base spirit for the drink. On top of that, I added Mondino Stagionato and an apple eau de vie distilled by my father-in-law. However, you probably can replace it with any high quality unaged apple brandy. 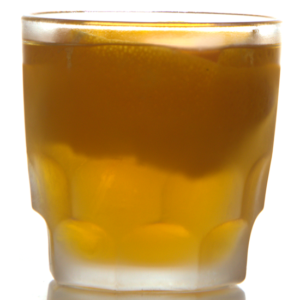 Although the drink is based on the Negroni and there are clear parallels, it nevertheless is noticeably different: There is less bitterness and a clear fruity note coming from the apple eau de vie and the herbal spirit, but at the same time it is more concentrated than a usual Negroni. The complexity of the Kraut & Knolle in combination with the herbal notes from Mondino, result in drink that demands your full attention! Of course, you could make the drinking experience a little easier when serving it over ice, but there are times when such a complex cocktail is just the thing you crave. In conclusion, you could say that you should choose this drink when a normal Negroni just does not do it for you!