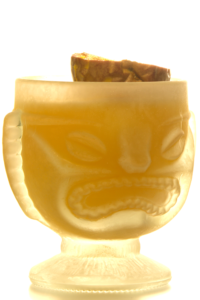 Similar to last week’s article on the Tesla Sljivo this one is about another new German spirit start-up. The Revolte Rum is distilled in Worms and wants to break with some of the conventions we associate with rum. Apart from being a completely different kind of spirit, the Revolte Rum has another thing in common with last week’s product: A lot of thinking went into the design of the bottle. That is why also its looks set it apart from regular rum!

I think it is needless to say that you will not find a lot of sugar cane growing in Germany. Therefore it should be clear that the raw ingredients for “German” rum have to originate from other, warmer countries. Before I tell you where the molasses for the Revolte Rum is from, I just want to mention that producing rum in German speaking countries seems to be the next “big” thing after the whole gin craze. At least I am noticing more and more distillers experimenting with producing their own rum. That being said, I already revealed that this rum is distilled from molasses and it comes from Papua New Guinea. After shipping the molasses to Germany it is fermented using a special kind of yeast, followed by distillation on a still with a rectifying column. So far the manufacturing of the Revolte Rum sounds like regular rum production, apart from the especially cultured yeast perhaps. However, the next step at least in my mind is what makes all the difference: The rum is aged or should I say rested for six months – no, not in casks – but in stoneware containers.

No cheating with this white rum!

The special thing about this kind of aging method is quite simple, or complex depending on your knowledge on barrel ageing spirits. The barrel typically adds spicy flavours to the distillate, but also subtracts repelling off tastes. This way the cask can mask smaller quality defects in an unaged spirit. Of course, some rum producers use the benefit of creating a more complex white rum by just aging it in wood and filtering it afterwards. Yet, I think of this as cheating, because they go the easier way instead of putting more effort into producing an already complex base spirit. The creator of the Revolte Rum however found a middle way here: He gives the distillate enough time to rest, without masking the already complex flavours with oak notes and I have to applaud him for that! 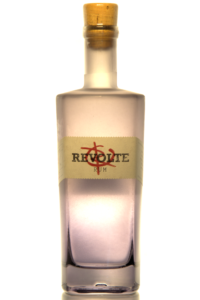 If I had not already known that this rum is made using molasses I would have mistaken it for being distilled from sugarcane juice. It is very similar to Rhum Agricole, but at the same time lacks the gasoline taste some French style rum has. If you look at other reviews of this rum, you will find that it is described as being very complex for an unaged rum and what can I say? They are absolutely right! Especially the aroma of the Revolte Rum is unlike any other white rum I have encountered so far. It comes close to an explosion of tropical fruits in combination with some Jamaican rum like ester notes. Still, I would rather use the Revolte Rum in cocktails which call for Rhum Agricole instead of mixing up an Mojito with it. Nevertheless, chances are also high that it makes a great Daiquiri… 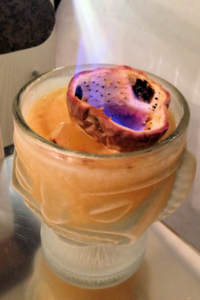 The exotic fruit flavours of the Revolte Rum somehow left me craving for a Tiki drink, but I also did not want to hide the rum’s aroma. Therefore, I decided to just use passion fruit as the main flavour for the cocktail. As a sour component I used a combination of fresh passion fruit and Ting grapefruit lemonade. On the one hand I did this because I am a bit bored with using lime for acidity in cocktails and on the other hand passion fruit and grapefruit seemed like a perfect match. What I ended up with is a very fruity, not too complex style of drink that leaves enough room for the Revolte Rum to show its masterpiece! The bright fruit flavours and darker ester notes manage to stay on top of the whole drinking experience and are beautifully accompanied by the passion fruit aroma.

In conclusion, the Revolte Rum is by far one of the best white rums I have tasted so far and I can without a doubt recommend it to you! The only drawback in my opinion is that it lacks some of the typical molasses based rum flavours, but that should not be a big problem, just use it wherever you would use Rhum Agricole. If you are really crazy you can even sip it neat and enjoy its beautiful aroma of a whole bunch of different fruits!