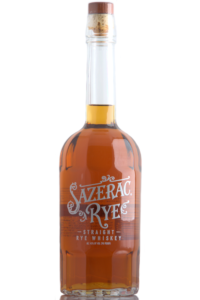 Like the Bourbon Blind Tasting in 2016, I decided to repeat the procedure in 2017 with a Rye Blind Tasting. The tasting was comprised of seven different rye whiskies and they were first sampled on their own and in a cocktail afterwards. Of course, we settled for the famous Manhattan cocktail – it maybe is the best cocktail to showcase a rye whiskey after all.

Rye whiskey, at least in the United States, must be distilled from at least 51 % rye while the remaining part can include other grains such as corn, barley or wheat. The whiskey is only allowed to be distilled to 80 % ABV and aging has to be done in new American oak barrels at no more than 62,5 % ABV. If said whiskey also wants to call itself “straight rye whiskey”, it must spend at least two years in the barrels and after the aging process no additives are allowed. In the case of this tasting seven different rye whiskies were sampled, ranging from a six-month-old to seven years and with an ABV ranging from 45 % to 50 %. The tasting was done in a double-blind style. This means that all participants, excluding myself, did not know which rye whiskies were poured and in which order. Bellow you will find the results of the neat sampling: 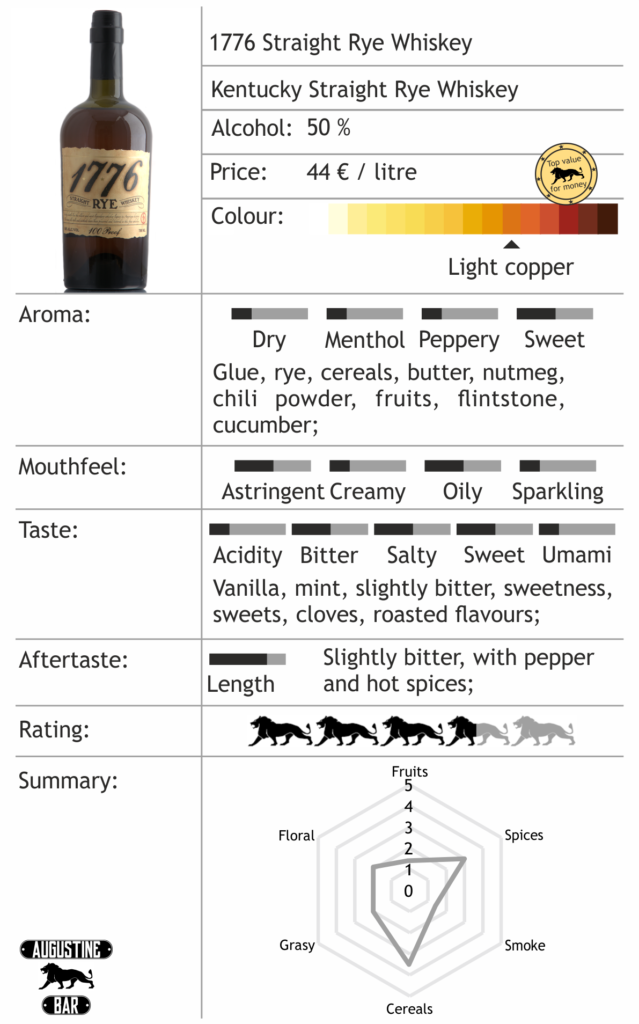 The 1776 Rye is marked by the Georgetown Trading Co and the recipe is said to be based on original notes from James E. Pepper from 1887. However, the whiskey with its mash-bill of more than 90 % rye is distilled by the MGP of Indiana and no age statement is given. The blind tasting shows that it does not necessarily have to be a bad thing that the 1776 Rye is produced by an industrial size distillery. With its clear cereal and rye notes it was enjoyed be everyone participating in the tasting. Also, the highest alcohol content in the tasting was nicely integrated in the sip. Another reason to buy the fairly priced 1776, is that the Georgetown Trading Co. plans to reopen the James E. Pepper distillery at the historic site. 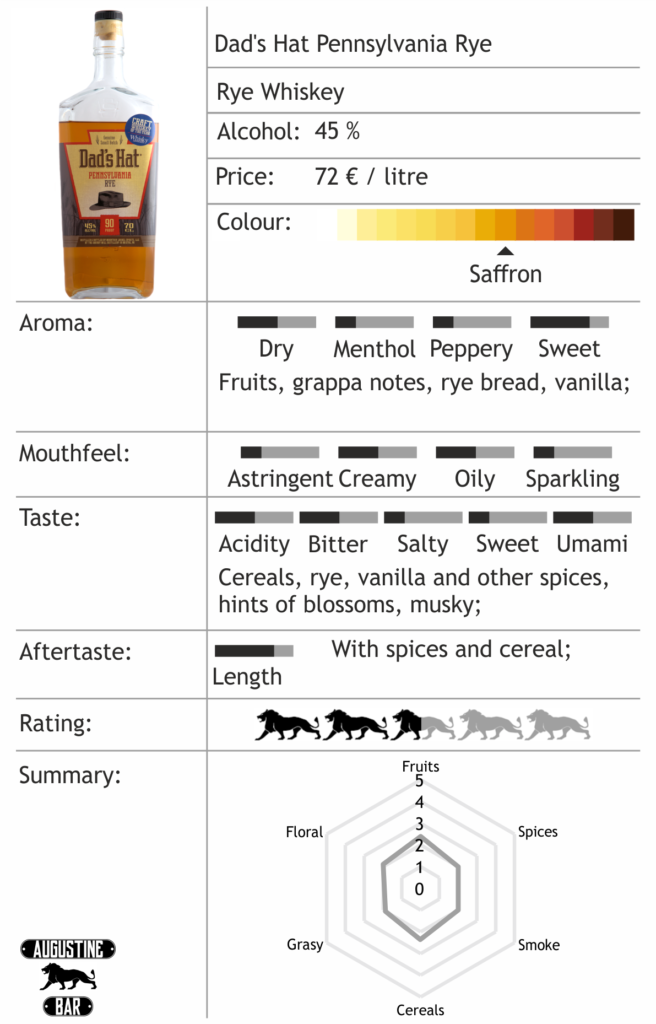 Now, the Dad’s Hat Rye Whiskies are something special. Not only are they distilled in Pennsylvania, the former rye capital which unfortunately is now only a shadow of its former self, but they are also aged in “Quarter Casks” with a capacity of around 50 litres. This is done to speed up the aging process of the whiskies. The rye itself is produced using only rye and malted barley, with the main part of the mash-bill being rye. However, the regular Dad’s Hat Rye is only allowed to spend six months in the barrels. So, it does not come as a big surprise that it lacks a bit of complexity. Don’t get me wrong, all the basic flavours of a good rye whiskey are there, but it is still a bit one-dimensional. Yet, this should change with the new Dad’s Hat Straight Rye aged for three years which is already available in the U.S. 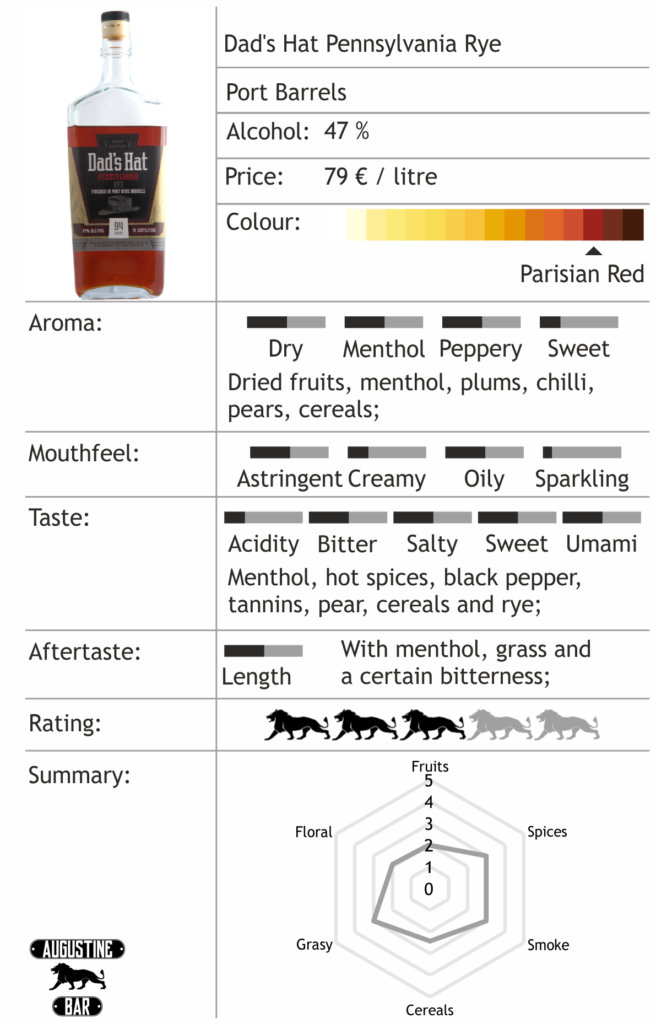 Some Dad’s Hat Rye varieties are finished in wine barrels before bottling. Of course, they will never be allowed to be called “straight rye”, but nonetheless it is an interesting approach. The result is a funky rye with some distinct fruit notes. The additional three months in port barrels were able to add some more depth to the whiskey, but it is still a little rough around the edges. Nevertheless, this might just be the right rye for a Manhattan! 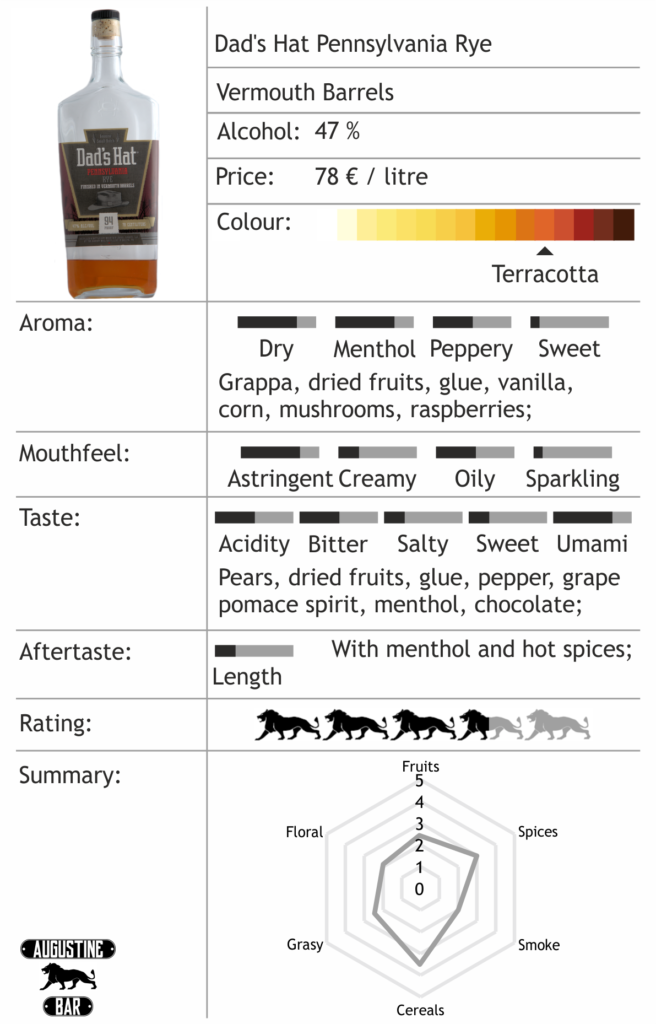 The third rye from Dad’s Hat in this tasting is finished in vermouth barrels instead of port casks. The barrels previously held Vya Sweet Vermouth from the Quady Winery. Like the port barrel finished Dad’s Hat the vermouth finished version is aged for at least nine months and you taste a difference. The dark fruits from the port finished version are replaced with grape pomace spirit notes which are very surprising to encounter in a rye whiskey! Yet, again a slightly strong menthol note shows that this rye also could make due with a few more months in the barrel. 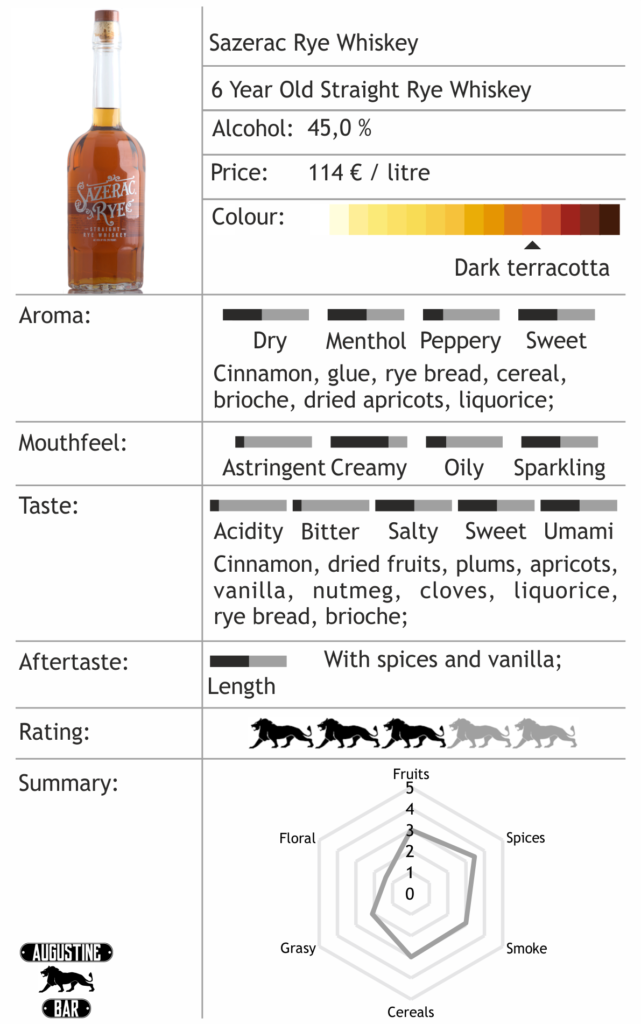 The iconic New Orleans staple Sazerac Straight Rye has even the famous Sazerac Cocktail named after it. While, I prefer making Dunkin’ Cocktails with the Sazerac Rye, I still hold it in very high regards. Although, it is very hard to come by these days. It is produced by the Buffalo Trace Distillery and its recipe is said to date back to the 1800’s and to be made from approximately 51 % rye, 39 % corn and 10 % malted barley. This means, the Sazerac Rye directly contrasts the trend of high rye content whiskies. It was also noticeable in the blind tasting: The Sazerac Rye was less acidic and less bitter than the other contenders. This means you could say that it was softer and smoother. However, it also came with the slight disadvantage of being not as complex as the others. Nevertheless, it is still a highly recommendable rye, if you can find it for a reasonable price. 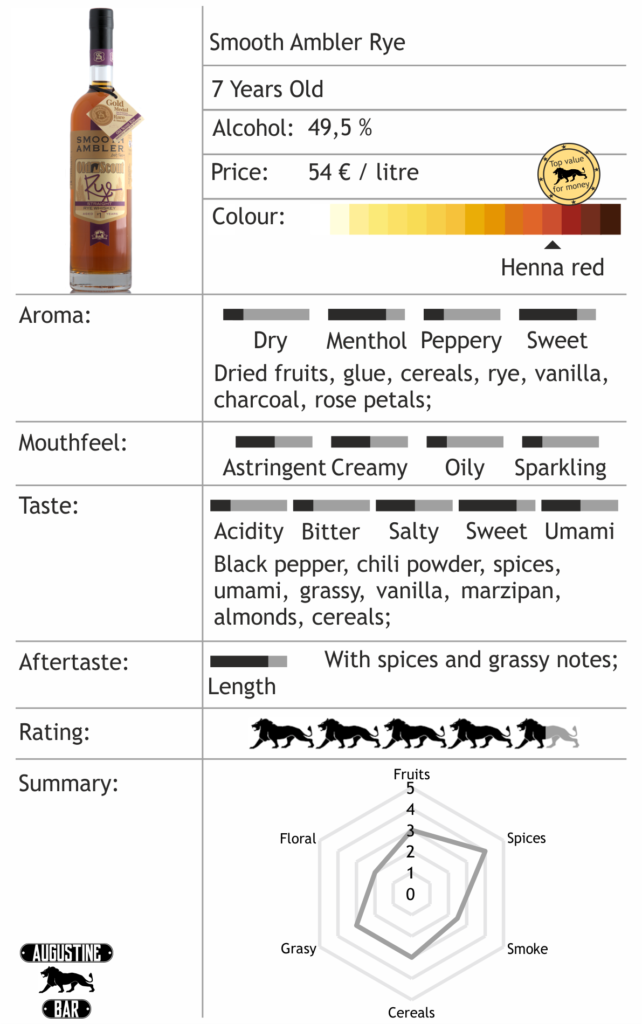 he Smooth Ambler Rye is another of the MGP of Indiana sourced rye whiskies and is made from the 95 % rye mash-bill. Yet, the whisky was aged for seven years in American oak barrels, which should have given it enough time to develop a whole bunch of flavours. To make things short, it did! The Smooth Ambler, because of its complex flavour profile, scored the highest in the blind tasting. It had the distinct rye notes of cereal and grass with a very spicy finish of black pepper and chilli powder. While the menthol of the higher alcohol content was noticeable, it never interfered with the overall sipping experience. On top of all of that, with around 40 € the Smooth Ambler is fairly priced for what he delivers! 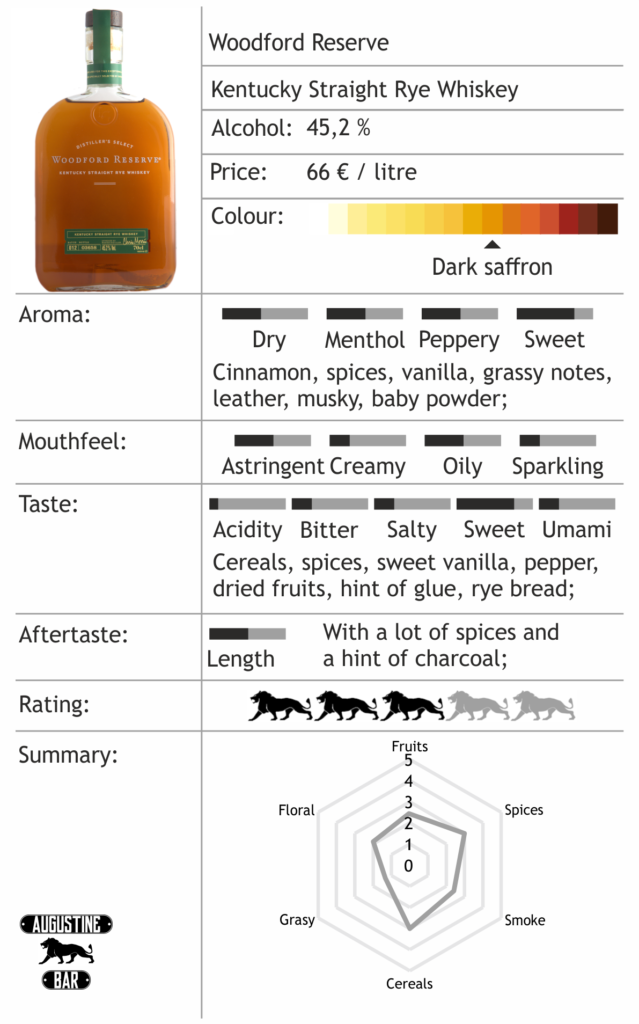 The Woodford Reserve produced by Brown Foreman is another curiosity on the American whisky market. Not only consists its mash-bill of only 53 % rye, but it is also distilled on real pot-stills, not the usual American hybrid-stills. I cannot tell you if you can tell the difference between the stills, but again, as with the Sazerac Rye, you notice less acidity and bitterness in the sip. However, the Woodford Rye is sweeter and less fruity. On top of that, there is a certain charcoal aroma to it. All in all, the Woodford Rye is quite pleasant to sip on its own. 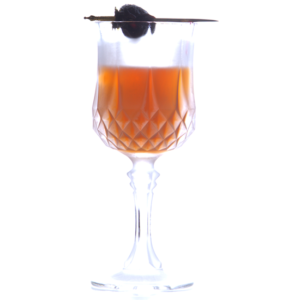 Now let us take a look at how the individual ryes tasted like when mixed in a Manhattan. Unfortunately, the sample bottle of the Dad’s Hat Rye Vermouth Barrels was empty after the neat tasting and we could not sample it in a Manhattan. 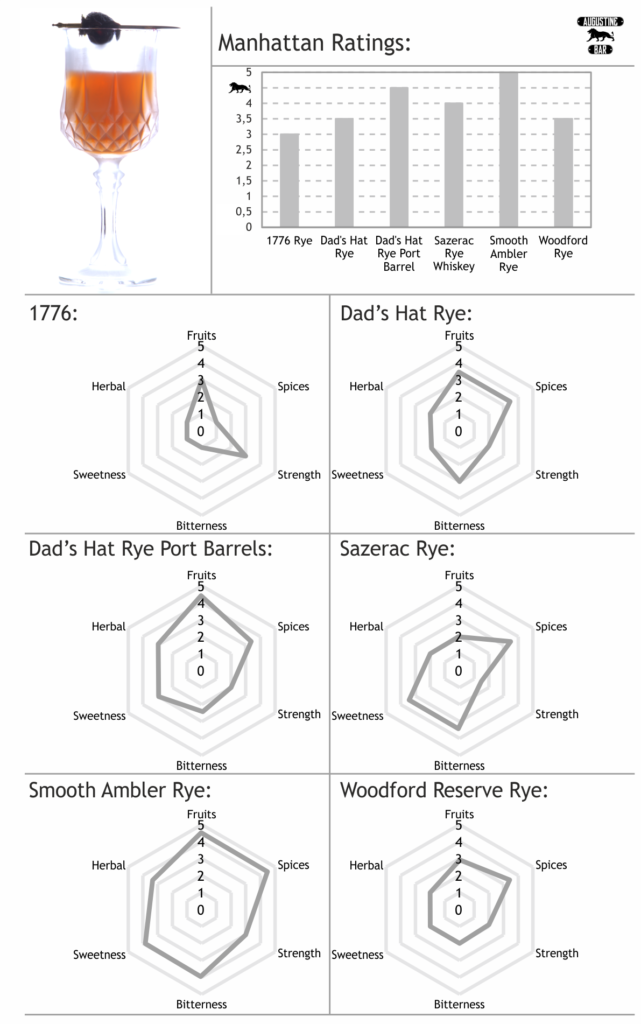 The overall result was not that surprising. The Manhattan with Smooth Ambler Rye was simply the best in every dimension and simply did not leave much room for improvement. Not that surprisingly the port finished Dad’s Hat came in second place, because the wine-like flavours played very well together with the vermouth and bitters. The Sazerac Rye resulted in the smoothest and an easy sipping Manhattan, which is due to its low rye mash-bill and overall mellow taste. There you have it! Depending on which style of Manhattan you like, you now can pick your favourite choice of rye!