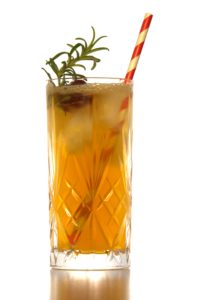 A friend of mine is a hobby musician and he was delighted by the connection between pieces of music and my drinks, but I didn’t have a cocktail that was inspired by one of his songs. Obviously I had to change that.


The first thing I did was to listen to his Soundcloud Playlist. Straightaway the first song gave me an idea. It reminded me of walking through the Scottish Highlands. What could be better fitting to the Highlands than Scotch whisky? First I wanted to incorporated myrtle into the drink but I didn’t have myrtle liqueur on hand – Shame on me. So I couldn’t make a Rob Roy version like I was planning, but I wasn’t even sure if my friend enjoyed Rob Roys as much as I do. At that point I recalled a video of Jamie Boudreau on the Small Screen Network. His highball style cocktail is called the Black Donald and it is a combination of Single Malt whisky, Drambuie a whisky based honey liqueur, lime and ginger beer.
All I had to do was to change things up a little. I switched the Single Malt for Johnnie Walker Black Label, because I could imagine the hint of smoke in the Black Label standing up against the ginger.
Instead of Drambuie I used sloe gin, just to give the drink more fruity aromas and to make it a bit more approachable for the none-cocktail-geeks out there.

The first thing you will taste when sipping the drink is the Scotch whisky, but it is immediately matched by the hotness of the ginger. The sloe gin just adds some fruity aromas to the aftertaste. All in all it is very approachable and a quite good sip. If the cocktail isn’t fruity enough for you, you can stir it a bit, so that the cowberry jam dissolves. My friend was equally satisfied with his drink and impressed by the different aromas playing together.