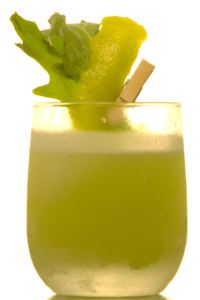 Some people say that there are not many good tequila cocktails out there. I think that’s a myth, because unfortunately most people still think shots with lemon and salt when they think of tequila. So for the ever so fast fading summer I thought I’ll have a go at a tequila cocktail.


In the cocktail-world everybody knows the Gin Basil Smash. It’s one of the most famous Gin cocktails and was created by Jörg Meyer. My tequila drink takes its inspiration partly from his creation and partly from the Pineapple Arugula Smash by Charlotte Voisey. However, where Charlotte’s drink only uses five to six leaves of arugula the Rocket Smash goes all the way.

This drink is another one of the cocktails I sort of tasted in my mind first which is a weird thing to describe, but sometimes I sort of can imagine tastes, that I only had tasted on their one, working together. In this case I used the arugula sprawling in the garden for a twist on Gin Basil Smash and it resulted in the intended refreshing summer drink, with the same intense green color of the original. As you can see in the pictures it looks like a healthy organic smoothie, but don’t under estimate it depending on the amount of tequila you use it packs quite a punch.

It is enough to use 1½ oz tequila if it is really hot, but you can go all the way up to 2 oz. It kind of depends on the freshness and quality of your arugula: too much tequila will overpower its surprisingly subtle taste in the drink. This leads me straight to another important thing: You should use a lot of arugula in this cocktail. Just take a hand full and if you think it is enough add some more. That’s vital for the drinks color and I don’t think that you could overdo it with the arugula in this.

Instead of the taste of a healthy smoothie, you get a mix of agave and arugula flavor supported by a backbone of sweet and sour mix. As said before, the arugula doesn’t overwhelm the taste of the cocktail, but works rather well with the blanco tequila. However, let’s not read more into this drink than it is: a simple refreshing on hot summer evenings (days). This time I didn’t pick the name myself, a colleague of mine picked it and I thought it fits the bill of the drink. – Salute and let me know what’s your favorite tequila cocktail!