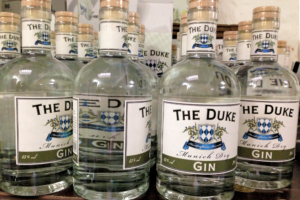 Daniel Priseman advised us in his “10 things every bartender should experience” to visit at least one distillery. I even would go as far as suggesting this not only to bartenders, but to every spirits connoisseur. Luckily, I now had the chance to visit The Duke Gin distillery in Munich!

However, if you are guided into the room where the still is located you instantly know why this gin managed to mark its spot amongst all the other German gins out there. The still itself is a pot-still from renown producer Carl, with a column still mounted to the side. Even if you can see this configuration with many other eau de vie and gin distillers, the whole aperture is tailor made for the Duke distillery.

For the production of all the different spirits in the Duke distillery’s portfolio only organic ingredients are used. Even the neutral alcohol for macerating the different botanicals is organic and comes from Brandenburg. Yet, I will not bore you with the details and get to the first spirit we tried: the Lion’s Vodka.

Vodka with a lion at heart

The Lion’s vodka is made using four different cereals: malted barley, rye, spelt and wheat. After the production of the raw distillate the vodka is redistilled once to 86 % ABV and chill-filtered afterwards. Then it is brought down to drinking strength with softened Munich tab-water.

The interesting thing about the Vodka’s taste are the pronounced fruit and spice notes. As our guide told us, they intentionally created a flavourful vodka. You can even taste some characteristics of the different grains. For instance I reckon the spiciness of the sip comes from the rye and the citrus and fruity notes from the wheat used in the mash. 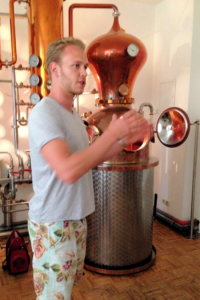 Moritz in front of the Duke’s Gin still

The duke and all his botanicals
However interesting the presentation of the vodka was, we were all waiting to hear the story behind the Duke Gin itself. It was created by two geography students back in 2008, because they wanted to create their own interpretation of a classic London Dry gin. After a few trial runs, they consulted a master distiller, who was happy to help.

In the end they settled for thirteen different botanicals, for instance cubeb pepper, hops, malt, orange blossoms, lavender and of course juniper. The interesting part here was that they source their juniper from two different merchants and blend them together to receive a constant quality. All the botanicals are steeped in neutral alcohol and water for 12 h – 24 h. After that period they are distilled once, again to an alcohol content of 86 % and chill-filtered. Yet, after the filtration the clear distillate is redistilled once again.

Of course I had already enjoyed the Duke Gin before, though I can not recall if I ever tried it neat. Now I instantly noticed herbal and spicy notes, which certainly are textbook London Dry. Nevertheless, there was no pronounced juniper aroma when taking a whiff of the gin. Only when tasting it the juniper became clearly noticeable and was accompanied by all the other notes from the nosing.

When we finished tasting the gin, we went to the basement of the duke distillery where the products are brought down to drinking strength, bottled and labeled. In this coordinated chaos we got a first hand impression what it means to operate a distillery in a crowded city: everything has to be moved by hand. There are no elevators in the building and all the hard work is done by so called “working students”. 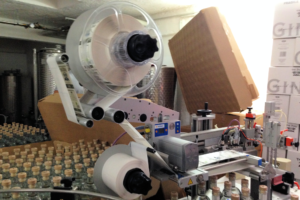 Labeling machine in the basement of the Duke’s Gin distillery

Big plans ahead:
Our guide Moritz told us, that because they at the moment can hardly keep up with the demand a transition and expansion is already planed. At the new location they will have a whole building for their own and also build a second still. The sight of the new distillery is still secret, but it will again be within the city limits. We as consumers can also be exited about new interesting spirits from the Duke distillery, which are already in the pipeline!