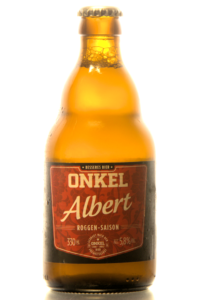 We Germans like to be proud of traditions and if there is one tradition on top of all of them it is the “Reinheitsgebot”! A lot of people mistake it for a law and think that beer is only allowed to contain barley, hops and water. Yet, another thing we Germans sometimes are is ignorant. This is why today I want to talk about a beer that is brewed according to the “Freiheitsgebot”. What this strange thing is and how the beer tastes like we will find out further on!

In this special case, I cannot even begin to count the several ways persisting on the “Reinheitsgebot” is wrong. For starters you would not even be able to brew beer from the ingredients listed above. One key ingredient which is missing is yeast. Second, the “Reinheitsgebot” is not even a law, it is just a transcript from the middle ages (1516). However, it is understandable that German brewers do not want to talk about what is the law, which dates back only to 1993 in its modern form. According to the “Vorläufiges Biergesetz” (preliminary beer-law) the addition of such nice things like polyvinylpolypyrrolidone is allowed as well as diatomaceous earth filtering. Nonetheless, the most ignorant thing about being proud of the “Reinheisgebot” is the assumption that products brewed with of ingredients are just not worthy of being called a real beer. Yet, other great nations which also traditionally produce beer are doing it or many years. I know I am exaggerating here, because Belgian beer for instance containing cardamom and orange peel is very well allowed to call itself beer in Germany. Though, I don’t even want to know the number of people who think exactly that way.

The uncle who uses rye

Ok, enough ranting on about made up rules and on to the beer itself. The guys behind Onkel Albert produce their beers according to the “Freiheitsgebot”. This basically means that you can and should do whatever you like when making your beer. In the case of the Saison they use a mix of Pilsner and wheat malt along with some rye flakes. For hopping they use Merkur and Hallertauer Mittelfrüh, while the beer is also dry hopped with Hallertauer Mittelfrüh. They even list the complete recipe for the beer on their homepage and I just can applaud that! I am always for transparency when it comes to drinks and food! Unfortunately, to still being allowed to call their Saison a beer they have to brew it in the De Proef Brouwerij in Belgium. So after all this commotion let us see how the Onkel beer tastes like. 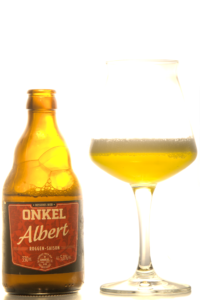 The aroma of the Onkel Albert is very interesting and varies between pipfruit and wheat notes. There are also some spices lingering in the back. In the taste the same aromas show themselves in combination with a medium amount of bitterness. You definitely notice the hops, but they are not too pronounced and lead to a dry mouth feel. In fact this beer is very dry and I guess the reason for that is the use of champagne yeast during bottle fermentation. In a guide for the production of high gravity beers the author issues a warning on using champagne yeast with beers. He thinks that the finished product might end up too dry and looses typical aromas gained by using beer yeast. While I am not an expert, I think to some extend this is also the case with the Onkel Albert. While there are a lot of characteristics of a great beer here, it is also missing something. It could make due with just a little bit more flavour. Nevertheless, this is still a great after-work sipper and you should give it a try! If only for the experience on what a beer with rye in it tastes like.