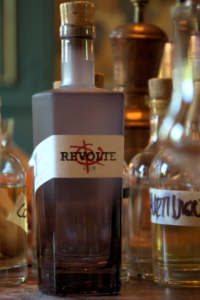 I already introduced the Revolte Rum to you last year. In the meantime master distiller Felix Kaltenthaler was busy creating some more batches of his great unaged rum. However, Felix did not stop at making his own individual rum, but he also wants to share the knowledge he gained on his journey towards his finished spirit. Of course, when he invited me Munich to join his Master Class paired with a seminar on distilling I did not hesitate and quickly booked a train ticket!

Daiquiri on the rocks against the heat 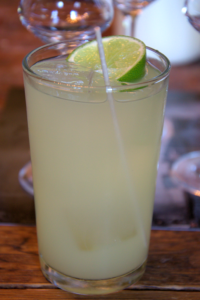 Daiquiri On The Rocks made with Revolte

It is no big secret that I love Felix’s rum and cocktails made with it, so I was very happy when I received the invitation to his Master Class. Besides that, it took place in the Goldene Bar in Munich, one of my favourite bars in all of Germany! So on Monday, I packed my camera and pocketbook and headed to Munich. Even though it was unbelievable hot outside, an ice cold Daiquiri on the rocks was waiting for us in the cool and extremely beautiful interior of the Goldene Bar. Therefore, everything was set to listen to Felix describe the hard and laborious way of creating his own spirit from scratch. However, he is also lucky that he was born into a family of winegrowers. The Kaltenthaler family estate is already in the third generation and when Felix’s father took over the vineyard his grandfather was bored and started a distillery. At the moment Felix’s uncle is the head of the distillery, but Felix is predetermined to take over.

What is needed to be able to distil your rum 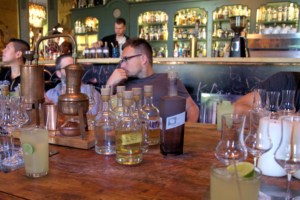 Since his family was already in the business of distilling eau de vies, Felix wanted to create something new, also so that no one could interfere with his vision. On top of that, he also was a big fan of rum every since his first experiences with Cuba Libres. As base material fo his rum, Felix would have loved to work with fresh sugarcane juice, but there is no way of transporting it across an ocean without it going bad. Instead, he started off by ordering twelve different molasses samples from all over the world. Felix just fermented them and began distilling the mash on a small still made out of glass. When he got to the molasses sample from Papua New Guinea he was just blown away by its fruity, but also ester heavy taste that he stopped right there to order a whole batch of the stuff. Yet, there was the little obstacle that shipping from Papua New Guinea starts at 500 tonnes. Nevertheless, Felix did not resign, but instead made contact with stockbreeders who are the main clients for molasses here in Germany. This means that he is able to order just five tonnes of molasses at once. Neverhteless, the molasses still has to be dilute, because the sugar content would be too high for the yeast to turn it into alcohol. 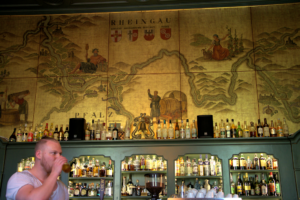 Felix in front of the Goldene Bar’s back board

Of course, the easy thing to do would have been to just order a selected yeast from a catalogue and start fermenting the whole sugarcane mess. Instead, Felix went another way and took samples of wild yeasts growing on his father’s wines. After several trial and arrow runs, he got help form a food laboratory to select a special strain of yeast for his rum. According to Felix’s account the yeast they are using, which they found on a Pinot Noir, is responsible for 40 – 45 % of the overall taste of the Revolte Rum. After the yeast is added to the watered down molasses the mash is cold fermented at 18 °C to have the biggest amount of flavour possible. The other way would have been to hot ferment it, but this would also have resulted in more CO2 production. The fast rising CO2 bubbles would have been accompanied by a loss of alcohol as well as less flavour.

Everything you need to know about stills

After the fermentation is done, it is essential to distil the whole thing as quickly as possible. Otherwise, again flavour will be lost. First, Felix took us through the different styles of stills. The traditional pot still where with each run only one distillation takes place and the column still where with each run multiple distillations are done. With the first run of a pot still about 35 % ABV are achievable and only in the second run it is possible to cut off the heads and tales of the distillate. However, Felix uses a hybrid still which has a pot still on one side and a small column with three bubble trays in front of the condenser. Each bubble tray acts as a distillation run itself, because the alcoholic vapours condense on the colder bubble trays. This means that the liquid level rises until it reaches the bottom of the bubble. From now on the following vapours have to pass through the liquid thereby heating and evaporating the liquid again. This process takes place at each bubble tray before the vapour reaches the condenser. This way Felix is able to reach an ABV of 78 % in one run. At this point we took a short break and also where able to try a current batch of Revolte Rum.

After the break, we were presented with five different glasses holding the three fragments of a distillation run and also the intermediate regions. Felix told us what each component smelled like and it was our job to get them into the right order. The heads of the distillation were easy to seperate from the others, because they had a powerful and stinging paint thinner smell. Also the tails were easy to detected, first off they were cloudy and second they had a buttery and awkward smell. Yet, it was harder to tell the heart of the distillation apart from the intermediate regions. The region between the heads and the heart also had a slightly glue like aroma, but there were already fruit esters and sugarcane notes noticeable. Likewise, the region between the middle cut and the tails had a combination of sugarcane and buttery, but not unpleasant notes. This was maybe the most interesting part of the whole seminar, because it let to a discussion on whether an extremely pure distillate which only contains the heart of the distillation run, or a spirit with some part of the intermediate regions is more interesting and therefor superior. Felix had a very good analogy on hand, because he argued that if you take a pear for instance, it contains not only pear flavour. There is also some bitterness from the kernels, the flavour of the skin and slight citrus notes. To get the whole spectrum of flavour in your finished spirit you have to use some parts of the intermediate stages, too. 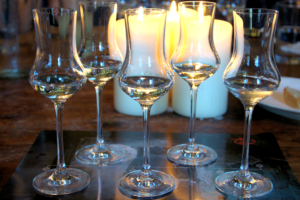 Different fractions of the distillation run

The difference between resting and aging

Felix’s rum is rested after being distilled, because a new made spirit always has some metallic characteristics. Therefore, he got his hands on a rare stoneware container in which the rum is allowed to rest for six months and loose its juvenile character. This certainly is a production step new producers of gin should consider. However, Felix also wants to make an aged version of his Revolte and we were lucky enough to try two of this first prototypes. Both were at barrel strength with one being aged in a cognac cask and the other in an Martinique rum barrel. Both were very interesting and powerful and we could not reach an unanimous verdict on which was the better one. In my personal opinion, the Martinique rum barrel aged version was more interesting and also better accompanied the characteristics of the Revolte Rum.

All in all, it was a great experience and we have to thank Felix for that excellent afternoon. Which we brought to a close on the terrace of the Goldene Bar. Just one last thing, Felix will introduce an overproof version of his Revolte Rum which is rested for one year, six months in stoneware and six months in a stainless steel tank. He just has to air it one more time and it will be available in October. I do not have to tell you that I am more than looking forward to it!