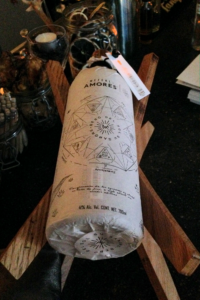 Just like the Munich Weininseln I am really enjoying what a big city has to offer on events! In this case I received an invitation to a Mezcal tasting held by Alex Mermillod and Mezcal Amores. It turned out that although I thought I knew everything on this agave spirit, that there was a lot more to learn!

After receiving the invitation by Capulet & Montague the German importer of Mezcal Amores, I just had to go to the Zephyr Bar to see how the Mezcal would live up to my expectations. So far I had heard that the Amores delivers much more than the famous smoke and burned rubber taste most of the other Mezcals out there. This already was proven by the Aperitif. We were served a fruity Mezcal Drink with lime and raspberries. Although the Mezcal was clearly noticeable, there still was enough room left for the other ingredients. So the drink’s combination of slight acidity, minerality and sweetness were the perfect way of starting the tasting! 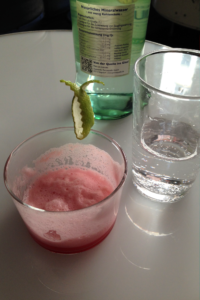 Before actually sampling the Mezcal, Alex took us through every step of the Mezcal production: All in all, there are six steps until you can hold a bottle of Mezcal Amores in your hands. Tough, the real beginning of the Mezcal lies even earlier. In the eight states where it is allowed to distil Mezcal you first have to plant agaves or search for some wild ones. Since, Mezcal Amores wants to have a big impact in the Mexican communities and as little as possible on the environment, they are trying to only use cultivated agaves. This means that after planting a new agave you will have to wait between five and thirtyfive years until you can harvest the heart of the agave, depending on the variety. However, let’s say we already have matured agaves and now want to make some beautiful smoky agave spirit! Those are the steps we have to accomplish first:

The Jima, which means harvest, starts after the Maestro Mezcalero decides that the agave is ready. This step maybe is the hardest part of the whole procedure, because the harvest is done by hand with machetes. Apart from that, each piña, the heart of the agave plant, ways between 50 and 100 kg. The farm hands or Jimadors as they are called in Mexico also have to lift them onto trucks with only ropes to help them.

After the harvest, a large underground oven, which pretty much ressembles a hole in the ground, is filled with one tone of red oak. Then river rocks are placed on top of the fire. They are covered with agave fibers, before seven tones of cut agave hearts are thrown in. Then a layer of tarp and earth are placed on top of them to retain the heat and smoke in the oven. After approximately five days all the inulin is transformed to carbohydrates and the oven is opened again. The special thing to take away here is that red oak is used to cook the agaves. Other Mezcal producers use pine instead, which results in a hefty smokiness. Mezcal Amores chose to smoke their piñas with red oak, so that the Mezcal still keeps an apparent agave character.

To ferment the cooked agave hearts all the piñas are crushed in an Egyptian mill, which basically is just a fancy word for a horse pulling a round stone in circles. The extracted juice and the fibers are then transfered to oak tanks.

4. FermentationIn the wooden tank spring water is added to allow spontaneous fermentation to take place. No additional yeast is added and in the Amores brochure the importance of bacteria is stressed. This is why I suppose that the production of alcohol is rather following the Entner-Doudoroff-pathway rather than the glycolysis. Depending on the season, the fermentation takes seven to ten days in Summer and 23 to 30 in Winter. As with the yeast, Mezcal Amores does also not add anything to speed up the fermentation process. Alex told us that there are other producers out there who rely on the help of ammonium-sulphate here, but according to him this is still detectable in the final product. So, if you get a fancy and sour aftertaste with your Mezcal, the producer probably was in a hurry…

After the fermentation has stopped the agave mash is double distilled on wood fired copper pot stills. The stills all have a maximum capacity of 400 l and during the second distillation the heads and tails are split. This is not done with any fancy equipment, but solely depends on the experience of the Master Mezcalero. Just to give us a little example Alex told us that the Mezcaleros determine the alcohol content of their spirit by sucking some Mezcal up a bamboo tube and slowly letting the liquid drip down in a bowl made out of a fruit shell. Depending on how long the formed bubbles of the Mezcal stay in the bowl they can tell you how much alcohol the liquid has.

The last production steps of the Amores are the dilution to drinking strength and the bottling. The interesting part here is that Mezcal Amores are making designated, individual bottlings for each market. Depending on where they think the market’s education level on Mezcal is. This means that the Mezcal in certain countries differs in the agave variety, the Mezcalero and the alcohol content. Of course, now everyone wants the bottles they can’t get in their country, but still I applaud this approach. This way they keep the specific character of the Mezcal, instead of blending it all together to form an insignificant mix.

Naturally, we were curious to see how all the hard work would influence the perception and taste of the Mezcal. So, we began the tasting with the regular bottling for Germany. It is made out of 100 % Espadin agaves by Master Israel in San Juan Del Rio in Oaxaca and bottled at 41 % ABV.

To make it quick the Amores Espadin really is more than just smoke & mirrors! Alex compared their approach to Mezcal with the Terroir concept in wine and through the Mezcal’s minerality you really can imagine to taste the region in which the agaves are grown. Still, the Espadin was not the only Mezcal Alex had in stall for us and we continued with a second bottling. It was made out of the Cupreata variety distilled by Don Faustino Robledo and bottled 43 % ABV.

First, the bad news: Right now the Amarás Cupreata is not available in Germany… And now the good news: It is damn good Mezcal! It may just be the most complex Mezcal I have tasted so far. Besides a more dominant smokiness than the Espadin, it has a strong agave taste together with a earthy minerality. Luckily the demand for this Mezcal was so high at the BCB that they are thinking about introducing this bottling to Germany, too. I can only hope that they do, because this gets my straight recommendation! Apart from that, I want to thank Alex for a very informative tasting and for a great talk afterwards!