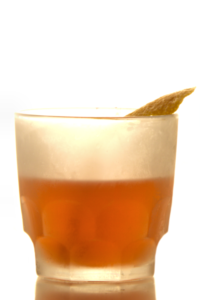 I already introduced the regular Hoos Gin to you some time ago. Now Heiko Hoos is back again with two bottlings of his Reserve Gin. Why am I sampling two different batches here, you might ask? Well, for the first one, oak chips were used to give the gin a bit of a barrel aged character and for the second Heiko used an oak barrel. Read on to here why Heiko decided to change his production method and what everything has to do with a literary critic born in 1930!

In the romantic concept of spirits and wine making there of course is no substitute for using barrels. It is just a bigger selling point for your wood aged product if you can show the people the casks where your spirit or wine has spent the last few months or even years. Yet, if you remove the optical appearance and reputation that comes with barrel aging you can also achieve a similar result when using oak chips or other barrel substitutes. Now, hopeless romantics will cry out and dismiss those methods as cheating or being cheep. In my opinion, as long as the producer clearly communicates that he is using a barrel substitute and does not try to sell you his product as cask aged I am willing to give the spirit or wine a try. 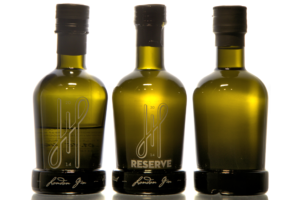 Especially, if the product in question is gin which, let’s face it, often does not profit from barrel aging. Yes, I know in the 18th century gin was transported and stored in barrels and therefore it might be a traditional style of gin. Also, now defunct Booth’s Gin was aged in sherry casks for some months, initially by accident. Apart from that, I did not encounter a modern barrel aged gin where the barrel aging did compliment the gin flavours rather than overwhelming them. Keeping this in mind, oak chips have another advantage: control. You decided how many chips you add to your distillate and how long you let them stay in touch with the spirit.

However, let us get back to the Hoos Gin. The first batch of Heiko’s Reserve Gin used oak chips to impart an additional oak flavour to his regular gin. Since some people criticised this production method as being cheep Heiko, decided to use a 30 litre oak barrel for his next batch of Reserve Gin. In this case, the gin spends four weeks in the barrel at around 82 % ABV and is then watered down to 50 % ABV for another week in the barrel. Heiko was so kind to send me a bottle of each batch so that I could make up my own mind.

In direct comparison with the unaged Hoos Gin the Reserve has better integrated flavours. Especially the eucalyptus and Szechuan pepper notes are less prominent and because of this, the gin is a little bit more accessible. The oak aroma is noticeable as a slight sweetness in the aroma and taste. Yet, there are not the typical caramel and vanilla flavours usually associated with oak aging. I like that the Reserve does everything a little bit better than the normal Hoos Gin, while still remaining a typical gin character. I reckon this would still make an excellent Gin & Tonic. Yet, my suggestion for this would be a straight up gin cocktail where the gin is still able to show its distinctive character. Or you could mix up a drink where usually only barrel aged spirits are used, like my take on a Sazerac you will find bellow.

Well, at the risk of coming across as a hypocrite: I enjoyed the cask aged Hoos Reserve Gin better than the one made with oak chips. Yet, one argument for my defence is that I took several runs at comparing all three Hoos Gin bottlings and the barrel aged Hoos Gin one each time. There is just a deeper complexity to it the other two lack. For me this constitutes in a dark molasses and liquorice aroma I did not encounter in any other gin so far. At the same time all of the other botanicals are, as with the oak aged Reserve gin, better integrated into the spirit. Again, this might just be one of the few gins I would enjoy neat on its own at room temperature. Damn it! I hate when I proof my statement that gin is to be mixed wrong…

Now let us take a final look at possible cocktails you can mix with the Hoos Reserve Gin. As mentioned above, I went for a Sazerac variation and ended up mixing a drink that only has the underlying structure in common with the original. Besides the Hoos Reserve gin, I added a barrel aged pear brandy from the Czech Republic I had on hand to give the drink a little bit of fruitiness. Also I threw in some dashes of Czech herbal liquor. Finally, I named the drink after a Cold War Kids song, which in turn is named after a literary critic. The meaning of the song is that there will always be people criticising your work, so why should you hold back on your ideas? This, somehow seemed like a good match for the oak chip aged Hoos Reserve gin. 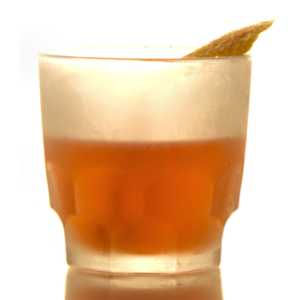 While the mix of Peychaud’s Bitters and absinthe flavour is certainly reminiscent of the classic Sazerac cocktail, there are also flavours that transform the cocktail into something new. The juniper and resin notes of the Hoos Gin are the first unfamiliar taste you will notice in this drink and soon afterwards you will be hit by the fruitiness from the Hruksovica pear brandy. Of course, there are less oak flavours than in a regular Sazerac, however there is still a hint of vanilla and caramel left. Moreover, the herbal anise and fennel notes of the Czech herbal liqueur add more depth to the cocktail and support the absinthe. This actually is the first “Sazerac” made with an almost white spirit I really enjoyed, the ones I had before made with Genever were not convincing in taste.