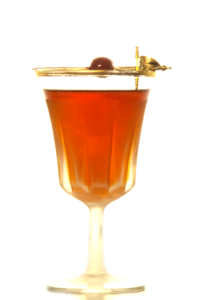 
It’s been a while since my first article on Martinis. You know how it goes when you have plenty things to do – some things fall into oblivion. But I’ll try my best to provide you with a new article every few days. Even if that means that I’ll have to write the article at night on my phone, which for some unknown reason is trying to change the subject to Yoga and Liverpool.

Ok that’s gone off topic a bit – so let’s get back to the drink: This time I not only named the drink after a song, but created the drink to match the song. Since it is called Bravery the drink had to be a bit intimidating.

Of course you could accomplish that by just adding a great amount of booze, so that it knocks you off your feet, but where’s the fun in that? – Ok scratch that, I just thought of at least two reasons… Nevertheless, I went for a more elegant approach by using three bitter ingredients. What could be braver than that? For all of you who don’t know why bitter is a brave flavor let me explain: No one likes the taste of bitterness as a child. It is something we first have to get used to and that’s because as cave man everything tasting bitter was potential poison. That means if you digest something bitter you have to be brave – it could be your last drink.

In this case I used Cynar an Italian amaro made out of artichokes, Fernet one of the most bitter ingredients I ever tasted and Punt E Mes which is vermouth with added bitters. To soften the bitter taste a bit I chose an Old Tom Gin as the base spirit. I derived the proportions from Jamie Boudreau’s golden ratio for vermouth cocktails, which really works quite brilliantly.